Home Home Slider Surf Excel in the midst of a social media storm for new... 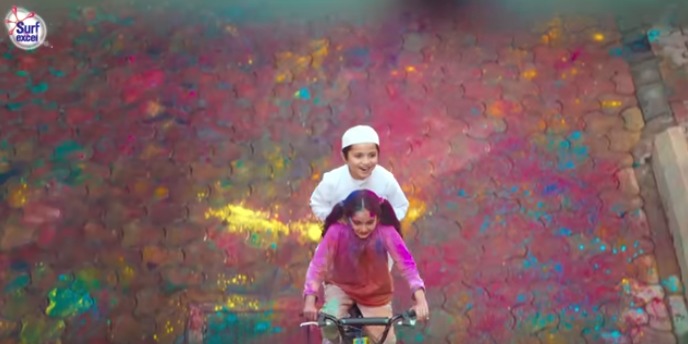 Surf Excel is facing extreme backlash on social media for its latest advertisement on Holi which shows Hindu-Muslim harmony.

Detergent brand Surf Excel, known for its heart-warming advertisements, recently tried to do something similar with its latest Holi special Rang Laaye Sang (colours that brings us together) campaign. Under this campaign, the brand released an advertisement centred around the Hindu-Muslim unity theme and instantly faced flak for the concept.

The one-minute-long add features a young Hindu girl, dressed in a white t-shirt, who chooses to get stained in Holi colours in order to protect her young Muslim friend who has to go to the nearby mosque to pray. The advertisement ends with its classic tagline, daag acche hain(stains are good)

With the advertisement, Hindustan Unilever, owner of Surf Excel, tries promoting religious harmony and bringing people together with the power of colours.

Released on February 27, the video has already managed to gather around 7,737,800 views on YouTube. On Twitter, however, the campaign has faced the wrath of users who feel that the ad is ‘Hindu phobic’ and controversial and wants to showcase that Namaaz is more important than Holi.

Twitter is filled with tweets criticising the ad under the hash tag #boycottSurfexcel.

“#boycottSurfexcel because you also know that the add is humiliating Hinduism and promoting love jehad. Gender selection and talking holi colour as “daag” is not acceptable by Hindu because it is done intentionally. Gender selection could have been reverse also,” read a tweet. 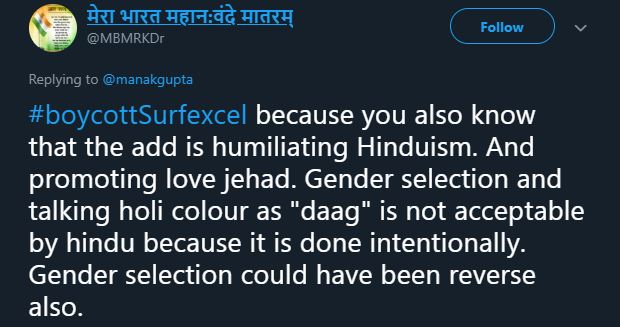 Commenting on the plot line of the ad, another user wrote, “If so then Ask #SurfExcel to make one such ad on Muharram. When #Raziya will take #Rahul to Mandir escaping from Blood sheds and Slaughter everywhere.” 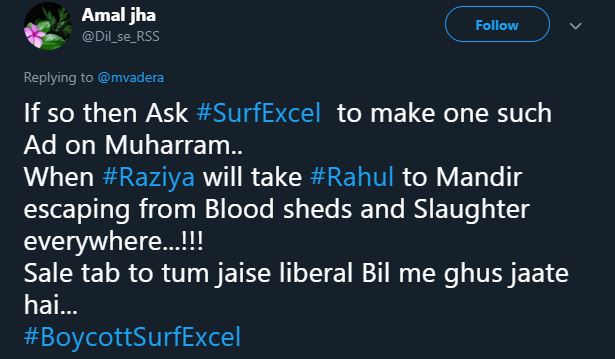 Saying that the ad humiliates Muslims, a user wrote,“#SurfExcel ad is humiliating Muslim girls to the core.. it is directly saying that a Muslim male child needs help of a Hindu girl for doing his prayer. This is shaming and humiliating all Muslim children.”

While many are raising objections over the theme, there are few who are appreciating the advertisement and the message behind it.

“A adv with right message… We don’t need to celebrate other religion festival for being friendly. Everybody has full right to celebrate their festival. “for you is your religion, and for me is my religion” #Secular #SurfExcel, a tweet read. 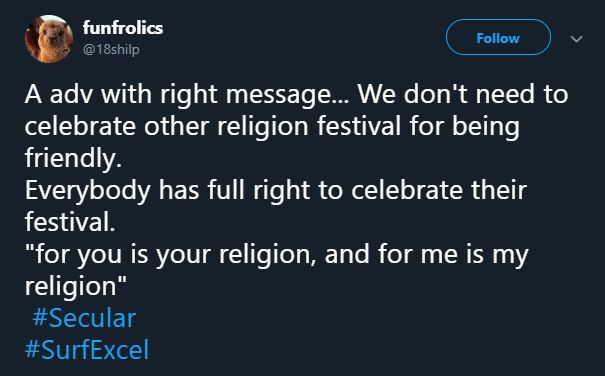 “The ad resonate with consumers by ringing true, personally positive & inclusive message! It conveys the exhilaration of soaring emotionally for progressive minds! But an extremely empowering notion everyone can relate to is missing due to its incompleteness #SurfExcel #Ad,” wrote another user. 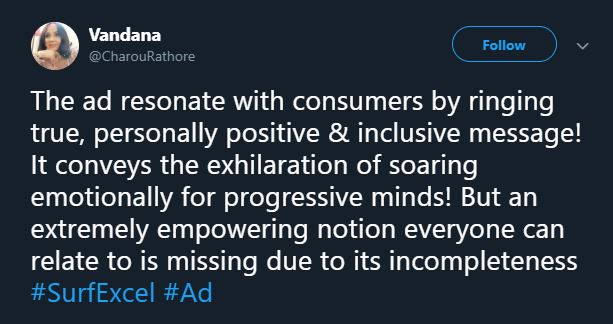 “There is nothing wrong in this ads. Why people take everything so seriously and make unnecessary interpretation .just cool always think simply,” another tweet read.

This is not the first time Hindustan Unilever (HUL) has faced flack for the plotline of their advertisement.

Earlier this year, HUL Kumbh Mela advertisement had irked several Twitter users. In the ad, a son contemplates abandoning his aged father in the crowd, but soon realises his mistake and comes back to him.

Soon after the ad was shared on the HUL twitter handle, people objected to it by saying it hurt sentiments of Hindus and portrayed the festival in wrong light.