The decades-old Ram Janmabhoobhi-Babri Masjid land dispute case to be settled through mediation said the Supreme Court Constitution Bench on Friday. The case will be settled via mediation for a ‘permanent solution’ by a three-member panel. The SC appointed Justice FMI Kalfullah, humanitarian Sri Sri Ravi Shankar, and senior advocate Sriram Panchu as mediators.

Ram Janmabhoomi-Babri Masjid land dispute case: Justice Khaliifulah (Retd) to be the chairman, for court appointed and monitored mediation for a “permanent solution”

The mediation will be confidential and the media will be banned from the proceedings which is to take place in Faizabad. The decision was made by the five-judge bench of the Supreme Court was headed by Chief Justice of India Ranjan Gogoi. The Court added that the mediation proceedings will be held in-camera. The mediation process will take place between four to eight weeks, eight weeks being the deadline for mediation. Supreme Court also added that the mediators can co-opt more on the panel if necessary. Uttar Pradesh government to provide mediators all the facilities in Faizabad. Mediators can seek further legal assistance as and when required.

KP Maurya, Dy CM of Uttar Pradesh said that there is no questioning the SC order and there were efforts in the past to arrive at a solution without any success. He also added that no devotee of Lord Ram would want a further delay in construction of Ram Mandir.

Babri Masjid Action Committee’s Zafaryab Jilani commented on the SC order, “We have already said that we will cooperate in the mediation. Now, whatever we have to say, we will say it to the mediation panel, not outside.” 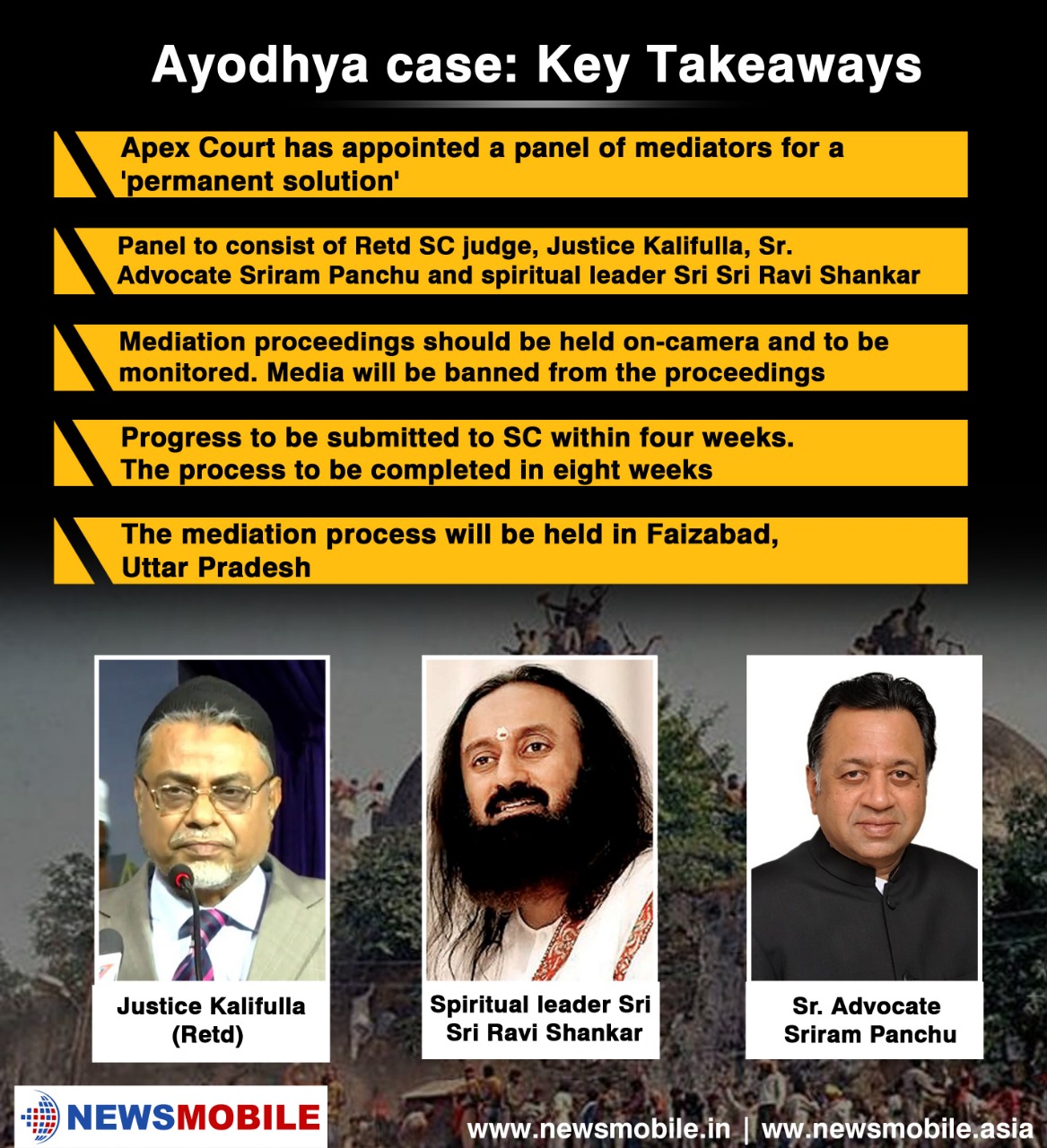 The dispute involves a huge 2.77 acres of land in Ayodhya where a 16th-century mosque was built by Mughal emperor Babur while Hindu activists believed that the mosque was built on the ruins of an ancient temple, which marked the birthplace of Lord Ram. They razed the Babri Masjid on December 6, 1992, leading to full-blown riots in Ayodhya.

The Court had suggested about two years ago that the two parties explore resolving the matter through negotiation. The negotiations did not take place as the parties involved wanted the Court to give the judgment.