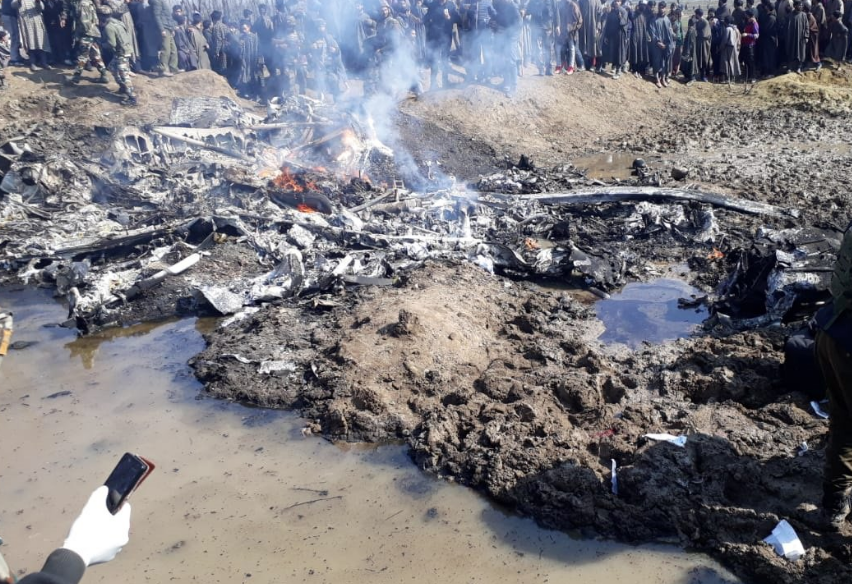 A day after IAF’s air strike in Pakistan, an IAF Mi-17 chopper crashed on Wednesday in Budgam district of Jammu and Kashmir. As per reports, there were four people on board and two bodies have been found on the site whereas the whereabouts of others are unknown.

The aircraft had taken off from Awantipora airbase and as per initial reports, the chopper crashed due to technical failure.

Location of the crash – The jet crashed in an open field near Garend Kalaan village in Budgam at 10.05 am, as per PTI.

SSP Budgam on military aircraft crash in J&Ks #Budgam: Some aircraft has fallen. As of now we aren’t in a position to ascertain anything. Technical team is here, they’ll ascertain facts. We have found 2 bodies so far and have evacuated them. Search is going on here pic.twitter.com/n3gv6BJeKS

The officials said that the jet broke into two and caught fire immediately and one body was spotted near the crash site. The identity of the deceased cannot be confirmed as of now.

Police on military aircraft crash in Jammu & Kashmir’s Budgam, say, “Two bodies have been found at the crash site.”@IAF_MCC#JammuKashmir pic.twitter.com/9bOIVCGoDx

Meanwhile, in a separate report, officials said that Pakistani jets violated Indian air space in J&K’s Nowshera district. As per reports at least three Pakistani aircraft entered the India air space and were pushed back immediately. It was reported that one F-16 was shot down by the IAF’s patrol team in retaliatory fire.

Airports in Jammu, Srinagar, and Leh have been put on high alert.
Flights to Jammu, Srinagar, Leh, Amritsar, Pathankot, Chandigarh, Dehradun and Dharamshala have been suspended for the time being in the aftermath of the air space violation and the crash.