Underlining that radicalisation and terrorism are the biggest threats to global peace and security, PM Narendra Modi on Friday said that time has come for all right-thinking nations to join hands to eradicate terror networks.

Modi, who was conferred the Seoul Peace Prize by the South Korean government, in recognition of his service to international cooperation, global growth and human development, said at the ceremony, “This award does not belong to me personally but to the people of India, the success India has achieved in the last five years, powered by the skill of 1.3 billion people.”

ALSO READ: Mulling over how we can stop Pak’s water share: Gadkari

The Prime Minister is the 14th recipient to be conferred with the award. Other past winners include German Chancellor Angela Merkel, former UN Secretary-Generals Kofi Annan and Ban Ki-moon, and renowned Bangladeshi economist Muhammad Yunus.

“I am honoured that this award is being conferred on me in the year that we celebrate the 150th birth anniversary of Mahatma Gandhi,” Modi said.

The Seoul Peace Prize was established in 1990 to commemorate the success of the 1988 Seoul Summer Olympic Games. The award came into existence to reflect the wishes of the Korean people yearning for long-lasting peace and stability in the Korean peninsula.

The Prime Minister said that like South Korea, India has also suffered the pain of division and cross-border terrorism.

“Our endeavour towards peaceful development has only too often been derailed by cross-border terrorism. The time has come for all right-thinking nations to join hands to completely eradicate terrorist networks. Only by doing so can we replace hate with harmony,” Modi remarked.

Modi said that around Rs 1 crore 30 lakh will be contributed to the ‘Namami Gange’ project, in an effort to clean the river which is not only considered sacred by the people of India, but as an economic lifeline.

Speaking on the occasion, the prime minister described it as an honour to unveil the bust of Bapu at Yonsei University. 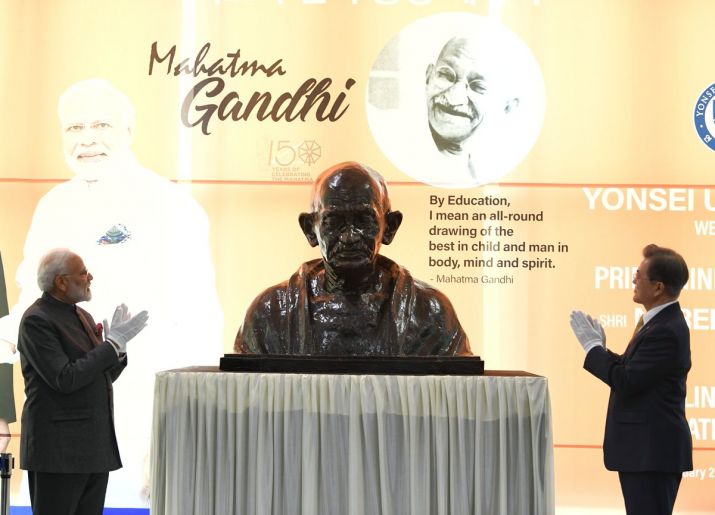