Samsung Galaxy Fold, announced on Wednesday in San Francisco, will soon be available in the markets for USD 1,980 (approx INR 1,41,000).

The phone will release on April 26. Samsung also took to its Twitter handle to share the news alongside a clip of the new phone.

Ten years after the first Galaxy, we didn’t just change the shape of the phone, we changed the shape of tomorrow. #GalaxyFold
Learn more: https://t.co/gYYGF4ZvdJ pic.twitter.com/C8s0Jxdhkz

The phone can be folded like a wallet so it can work like a smartphone with a 4.6 inch screen or folded out on its long edge into something more like a mini-tablet with a 7.3-inch screen. It is built with a sturdy backbone, with a hinge system that has multiple interlocking gears. All of these gears are hidden at the rear of the device, and allow the phone to transform from tablet to phone modes. At the rear of the device, there’s also a triple-camera system that will be used for both tablet and phone modes.

It comes with some interesting features like the device, when fully unfolded, will be able to simultaneously run three different apps on the screen. 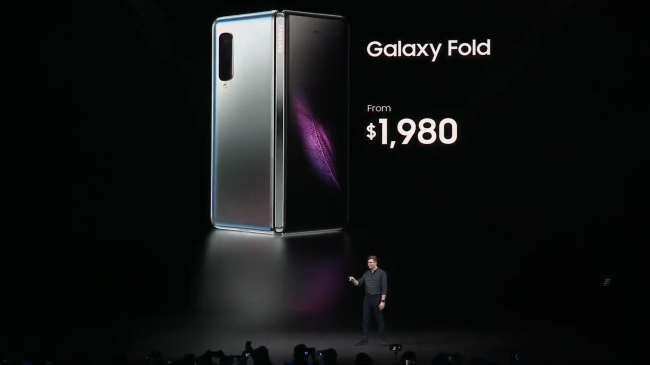 ‘Get ready for the dawn of a new era,’ said DJ Koh, who oversees Samsung’s smartphone division. The new phone, according to him, ‘answers sceptics who said everything has already been done.’

Samsung also released its other lineup of products–new Galaxy S10 phones- the S10e, S10 and S10+, they all boast of fancy cameras, sleek screens covering the entire front of the devices and 128 gigabytes of storage.

Samsung isn’t the only smartphone maker creating a foldable device, but it’s certainly one of the first to make it widely available. Xiaomi teased its folding phone recently. Huawei is also reportedly planning to release a foldable handset this year, and Lenovo has started to tease its own prototype.

Samsung will start accepting pre-orders for the phones on Thursday and all three S10 smartphones will come out March 8.