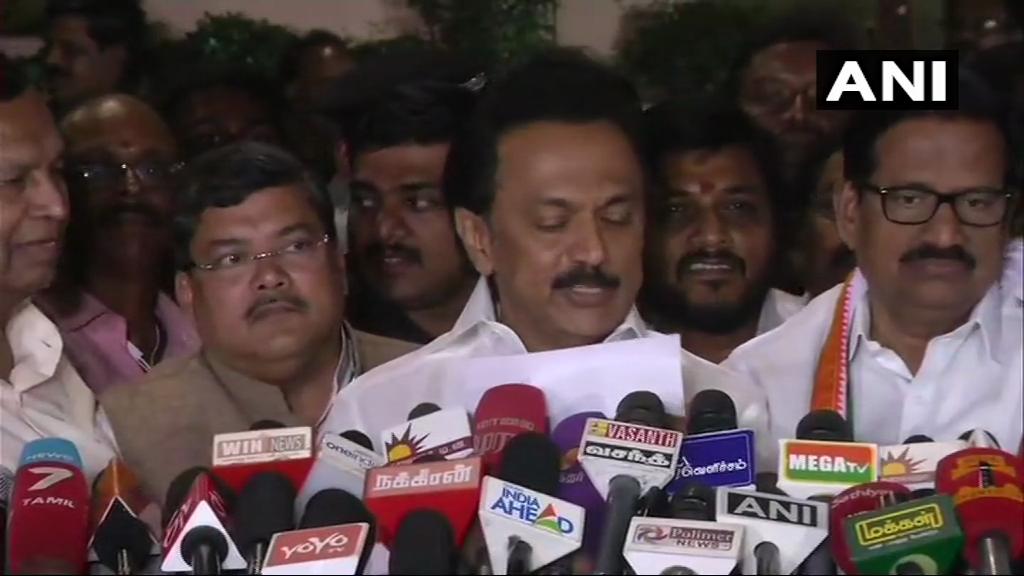 DMK president MK Stalin on Wednesday announced alliance with Congress and gave 10 out of 40 Lok Sabha seats to Congress in Tamil Nadu (nine seats) and Puducherry (one seat).

Stalin, while making the announcement to media persons, said: “The Congress will contest nine Lok Sabha seats in Tamil Nadu as well as the Puducherry seat as per the agreement we have entered into to stitch the alliance.”

DMK President MK Stalin: Out of total 40 seats, 9 Lok Sabha seats in Tamil Nadu & 1 seat in Puducherry have been given to Congress. https://t.co/fDD7w00e7P

“The distribution of seats will be done in due course of time. The seats will be identified in consultation with the alliance partner,” he said.

Taking a jibe at the meeting held by Union Minister Piyush Goyal on Tuesday, Stalin said: “Our talks were held at the DMK headquarters and not secretly in a hotel.”

“We will hold talks with the like-minded parties, which have stood by us for the people in the past. DMK’s election manifesto is being prepared by senior leader TR Balu and will soon be released,” he said.

Hitting out at the People’s Welfare alliance which was announced by the BJP and the AIADMK on Tuesday, the DMK president said: “Who said it is a people’s welfare alliance? It is money minded alliance.”

DMK’s women wing leader and MP Kanimozhi along with other senior party leaders had held talks with Congress president Rahul Gandhi in Delhi to thrash out the seat-sharing formula.

BJP has announced to fight the coming General Elections in alliance with the AIADMK in Tamil Nadu and Puducherry.

In 2014 Lok Sabha elections, AIADMK won 37 seats in Tamil Nadu, while the BJP-DMK alliance had won only two seats.

AIADMK said on February 19 that BJP would contest five Lok Sabha seats in Tamil Nadu and the lone seat of Puducherry.

PMK, which has a strong vote base in northern Tamil Nadu, especially among the OBC Vanniyar community, will contest six Lok Sabha seats and will get one Rajya Sabha seat.

In the 235-member Assembly, the AIADMK has 115 members followed by DMK 88, Congress eight, IUML and independent one each, while 20 seats are lying vacant on account of the disqualification of 18 members and the death of two MLAs.