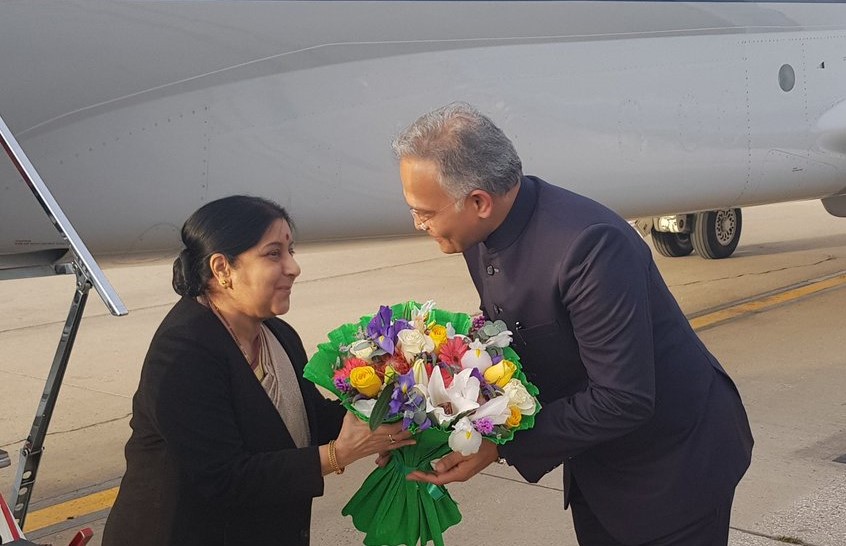 External Affairs Minister Sushma Swaraj who arrived in Madrid on Tuesday interacted with the Indian diaspora here and thanked them for their contribution, in diverse fields, in promoting relations between India and Spain.

EAM @SushmaSwaraj interacting with the Indian community in #Spain. Says meeting our own away from home is an important element of her programme. Thanked the community for their contribution in diverse fields and promoting India-Spain relations. pic.twitter.com/98Oc8mohoI

Among her engagements in Madrid, the external affairs minister is expected to hold a bilateral meeting with her counterpart Josep Borrell Fontelles to discuss bilateral, regional and global issues of mutual concern, according to official spokesperson.

The Spanish government will also confer upon the minister the prestigious Grand Cross of the Order of Civil Merit for India’s swift response through ‘Operation Maitri’ in rescuing 71 Spanish nationals from Nepal in April 2015, in the wake of the disastrous earthquake.

Indian ambassador to Spain, Sanjay Verma said, “India’s relations with Spain have gained momentum in the past two years with high-level visits and engagements, trade and investments.”

India and Spain have enjoyed cordial relations since the establishment of diplomatic relations in 1956.

On February 16, Swaraj embarked on three-nation visit Bulgaria, Morocco and Spain to expand avenues of cooperation and provide and opportunity to discuss regional and global issued of importance.