The Raksha Mantri on Friday dismissed a media report that claimed that Defence Ministry officials had raised concerns over the direct involvement of Prime Minister’s Office in the Rafale deal and said that the report failed to publish response of the former minister Manohar Parrikar’s response to the note by the MoD over negotiations over the Rafale deal.

“Then Defence Minister Manohar Parrikar ji replied to that MoD note saying ‘remain calm, nothing to worry, everything is going alright.’ Now, what do you call the NAC led by Sonia Gandhi’s interference in earlier PMO? What was that,” the Defence Minister asked in the Lok Sabha.

Several opposition leaders also commented on the issue and there was an uproar in the House.

The Congress and Trinamool Congress called for a probe by Joint Parliamentary Committee and criticised the prime minister.

Mallikarjun Kharge, Congress leader in the Lok Sabha, also reiterated Rahul’s demand for a joint parliamentary committee. “Everything will be revealed then. We don’t want any explanation now. We have heard many explanations from PM. 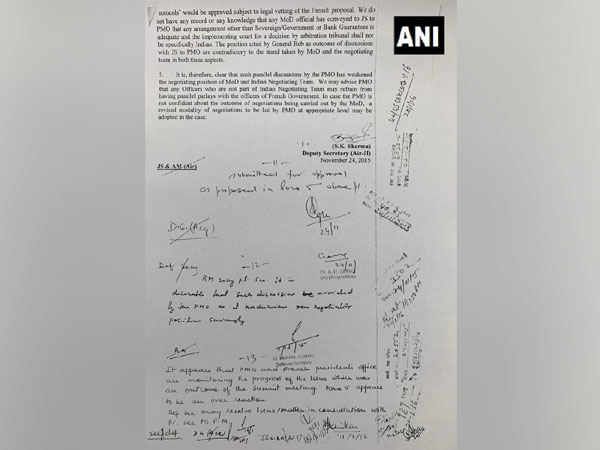 According to the document accessed by ANI, the file also has a noting of the former Defence Minister Manohar Parrikar who dismissed concerns raised by the officials of his ministry in the Rafale aircraft negotiations saying that the fear was an “over reaction.” He also called for further consultations to clarify any points.

ALSO READ: Then French PM had written to Indian government backing the Rafale…

A media report published on Friday claimed that the Defence Ministry officials had raised concerns over the direct involvement of prime Minister’s Office in the Rafale deal saying “parallel discussion by the PMO had weakened the negotiating position of MoD and Indian Negotiating Team.”

Parrikar in the same file noted at the end: “It appears that PMO and French President office are monitoring the progress of the issue which was an outcome of the summit meeting. Para 5 appears to be an overreaction” Parrikar further tasked Defence Secretary G. Mohan Kumar to resolve the matter in consultation with Principal Secretary to Prime Minister.

Congress president Rahul Gandhi on Friday displayed the file noting in a press conference to indicate that all was not well in the government during the Rafale deal negotiations.