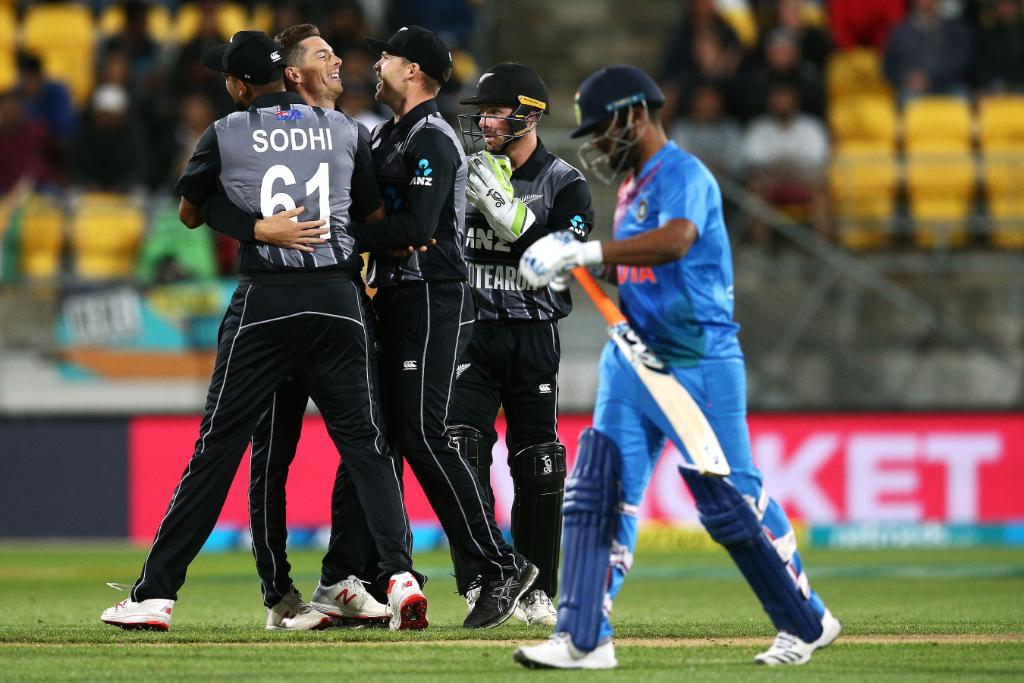 India lost the opening T20 international against New Zealand by 80 runs as the entire visiting team was bowled out by the hosts at the score of 139 here at the Wellington Regional Stadium on Wednesday.

Chasing a tough target of 220 runs, former skipper MS Dhoni waged the lone battle but could not finish the game for his side.

The Indian opening pair gave a poor start to the team as Rohit Sharma and Shikhar Dhawan built an 18-run partnership for the first wicket. While Sharma lost his wicket to Tim Southee at the score of 1, Dhawan was picked up by Lockie Ferguson at the score of 29.

After the dismissal of the openers, India lost wickets in quick succession. Rishabh Pant departed for 4 runs while Vijay Shanker, who was looking solid on the crease, fell to a tossed up delivery by Mitchell Santner at the score of 27.

Having lost 4 wickets at the score of 64, India needed some steady knocks to take the team closer to a massive target of 220 runs. At this time, India’s most reliable batsman, Dhoni, walked to the crease. Being a pro in situations like these, Dhoni kept the Indian hopes alive.

But unfortunately, the wicket-keeper batsman did not get much support from the other end. Karthik walked back to pavilion after scoring 5 runs and India’s comeback man Hardik Pandya too failed, as he could only score 4 runs on the day.

After the departure of Hardik Pandya, another Pandya (Krunal Pandya) walked to the crease. Dhoni and Krunal stitched a 52-run partnership but that was not enough, at the end of the day.

Krunal lost his wicket after scoring 20 runs. He was followed by Bhuvneshwar Kumar (1) and Dhoni (39) in the next two overs. The last Indian wicket fell in the 20th over in the form of Yuzvendra Chahal (1).

For New Zealand, Tim Southee emerged as the highest wicket-taker with figures of 3. While Ferguson, Ish Sodhi, and Santner picked two wickets each, pacer Daryl Mitchell contributed with one wicket in the match.

Earlier bowling first, Indian bowlers proved to be quite expensive and leaked a lot of runs. Hardik Pandya took the highest number of wickets in the match-two.

For New Zealand, opener Tim Seifert (84) was the highest runs scorer and was also adjudged as the Player of the Match.

India and New Zealand will play the second T20I of the series on February 8 at Eden Park.