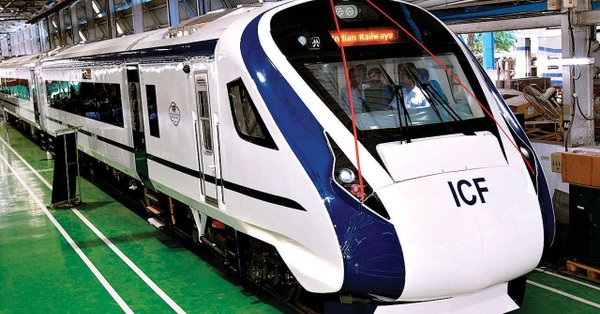 Railways Minister Piyush Goyal, on Sunday, renamed the made-in-India ‘Train 18’ as ‘Vande Bharat Express’, highlighting the success of Make in India and contribution of Indian workers.

Addressing media, Piyush Goyal said: “People suggested various names but we named it ‘Vande Bharat Express’. We have conceptualised ‘Train 18’ as a train which will be designed in India, all the parts will be built in India which will become India’s pride. It will be exported to different countries.”

“Till when we will run trains designed in foreign countries and till when India will depend on foreign technologies? It was Prime Minister Narendra Modi’s wish that we make a train under Make in India,” the Railway Minister said.

The Railway Minister said that the train is completely ready said his ministry will send a letter to the Prime Minister on Monday seeking his availability for the launch of the train.

Vande Bharat Express will run from Delhi to Varanasi taking stops at Kanpur and Prayagraj. It has 16 coaches (2 executive chair car and 14 chair car) and will take only eight hours to complete the journey.

According to Goyal, “This train should have a unique identity. It is a world record that all the design, development and prototype has been completed within 18 months. This is a prime example that Make in India can develop trains.”

The train has two coaches that have toilets for specially-abled. The fully air-conditioned train will move with all gates closed.