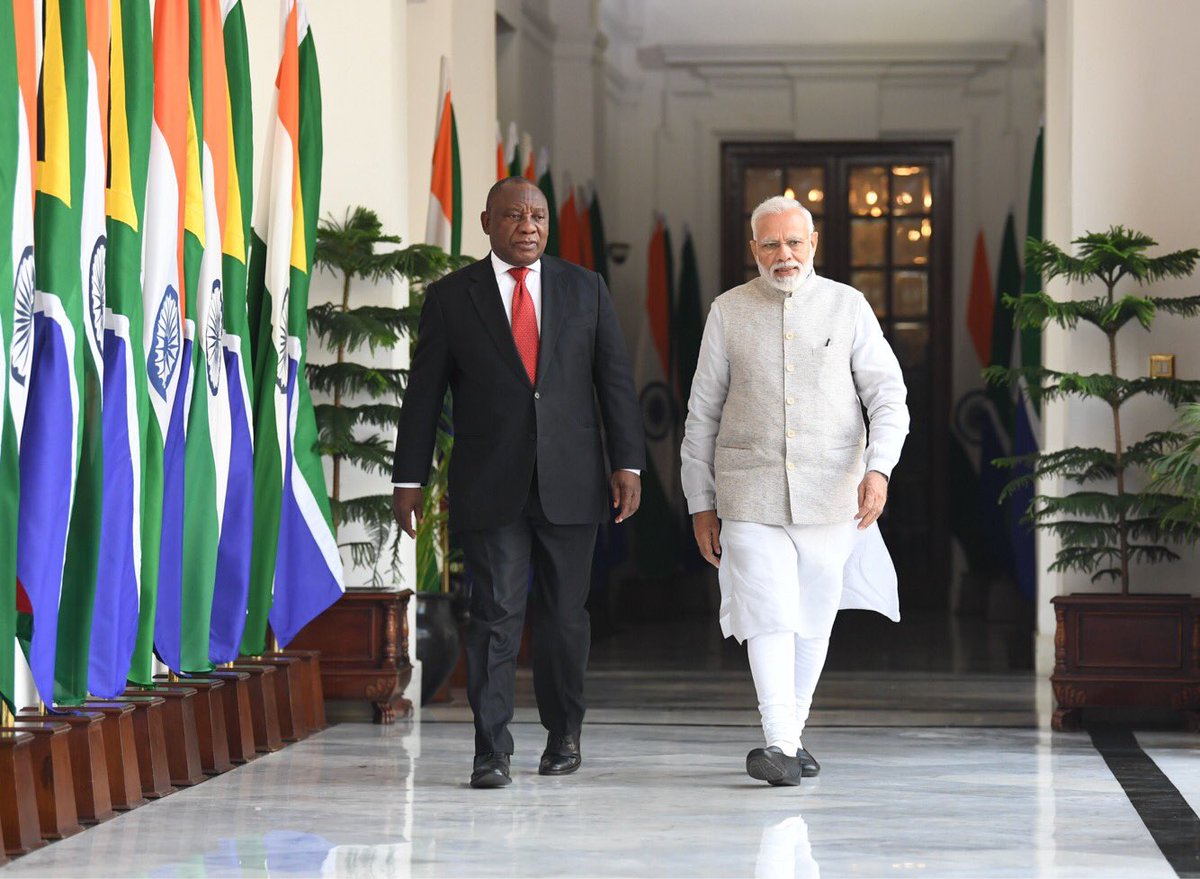 Prime Minister Narendra Modi, in his media statement after the delegational level talks at Hyderabad House, invoked the legacy of Mahatma Gandhi and Nelson Mandela to stress on the close bilateral ties.

He said the two sides had reviewed all the dimensions of their ties. relations. “Our trade and investment relations are becoming more and more intense. Our bilateral trade is more than $10 billion. South Africa participated as the Partner Country in the “Vibrant Gujarat” summit held this year. And Indian companies are taking active part in the efforts of President Ramaphosa to increase investment in South Africa. We are also partners in South Africa’s skill development efforts. The Gandhi-Mandela Skills Institute is set to be established soon in Pretoria. And we both are committed to take these relationships to a new level,” he said.

ALSO READ: Decision on Priyanka’s entry into politics was taken some years back:…

Stressing on the importance of the Indian Ocean region, Prime Minister Modi said: “If we look at the map of the world, it is clear that both India and South Africa are located at very important places in the Indian Ocean. We both are democratic countries filled with diversities. We are the successors to the legacy of Mahatma Gandhi and Nelson Mandela. And therefore, the broad global outlook of both the countries is quite similar to each other.”

“We are also working together on the reforms of the UN Security Council,” he said.

Prime Minister Modi said that it is the first visit of the South African President to India as the Head of State.

India and South Africa established their strategic partnership in March 1997 during the state visit of President Nelson Mandela to India. Over the last few years there has been a significant intensification of the bilateral engagements between the two countries in various fields.

“PM @narendramodi warmly welcomes President of #SouthAfrica @CyrilRamaphosa ahead of delegation level talks. This is their fourth meeting within a year, highlighting enhanced engagement with South Africa & the African continent,” the MEA spokesperson tweeted.

PM @narendramodi warmly welcomes President of #SouthAfrica @CyrilRamaphosa ahead of delegation level talks. This is their fourth meeting within a year, highlighting enhanced engagement with South Africa & the African continent pic.twitter.com/Iu2xQip9H0

According to a press statement released by the Ministry of External Affairs President Ramaphosa is accompanied by a large 50 member business delegation to India. South Africa is also keen to attract investments and have set a target of USD100 billion over the next three years or so.

Nearly 150 Indian companies are present in South Africa, including some of the prominent companies and business entities of India. They have invested around USD 9 to10 billion and created around 20 thousand jobs locally. Trade between India and South Africa has also increased to USD10.7 billion in 2017-18 with an increase of about 13% over the previous year, the statement further read.

President Ramaphosa, who is on a two-day state visit to India and the Chief Guest at India’s 70th Republic Day parade this year, said while addressing the occasion that “to South Africa, India is a strategic partner”.

“During the deliberations the Prime Minister and I were in agreement that a considerable scope exits for our countries to grow and deepen our bilateral relations at a number of levels but more particularly at the economic level,” President Ramaphosa said.

“We concluded this morning over a three years strategic programme of cooperation aimed at deepening bilateral engagements between India and South Africa, and assuring that the result-oriented partnership benefits the people of both the countries of the world,” he said.

Trade has increased between the two countries over the last two years, and India is significantly South Africa’s second largest trading partner.

“There are a number of areas for extending future cooperation between the two countries, including agro-processing area, defence procurement, mining equipment and technology and financial services sector, as well as close cooperation in the multilateral groupings that our two countries belong to and work very closely with one another in BRICS, G20, Commonwealth, International Political Science Association (IPSA), Indian-Ocean Rim Association (IORA) and others,” President Ramaphosa added.

“We were also able to extend our gratitude to the support that India gave to South Africa to be elected in the United Nations Security Council as a non-permanent member,” the South African leader noted.

President Ramaphosa also assured India that during South Africa’s tenure at the Security Council, the nation will extend peace and security, and strengthen the multi lateral system in the world.

Secretary (Economic Relations) in the MEA, T.S. Tirumurti, briefing newspersons on Thursday on the three-year roadmap said: “It will be a program of action over three years for our strategic partnership. And this will be significant in the sense that it will capture all the areas where we feel that we should take it forward in a time-bound manner.”

The official said that defence and security cooperation will continue to be an area of close bilateral cooperation. South African defence industries are looking at our Make in India initiative with renewed interest. India and South Africa have strong interest in maritime security in the Indian Ocean region. India has also extended training slots for South African defence personnel, and both share common concerns in the area of terrorism, Financial Action Task Force (FATF), cyber-security.

Later in the day, President Ramaphosa will deliver the Gandhi-Mandela Freedom Lecture organised by the Indian Council of World Affairs under the IBSA framework as a part of the celebrations of the 15th anniversary of IBSA.

India and South Africa are also looking to establish a Gandhi-Mandela skill Institute to be launched in Pretoria very soon.