Prime Minister Modi on December 29 was addressing a rally in Ghazipur, Uttar Pradesh, He also released a commemorative postage stamp. In his rally, he claimed that the Karnataka government has waivered loan of only 800 farmers even though they promised loan waivers for lakhs of farmers.

“Even in Karnataka, Congress made a backstage entry and established a government there. They gave lollipops to people in terms of assurances and promised a loan waiver but only 800 people got their loan waived. How can you trust these lollipop companies?” Modi said.

Karnataka CM HD Kumaraswamy, in July, has decided to waive off massive farmer loans. He announced that crop loans worth Rs 34,000 crore will be waived off. Later, the figure had shot up to Rs 44,000 crore.

In his rally in Gazipur, PRime minister Modi apparently quoted a report published in Times of India on December 13, 2018. 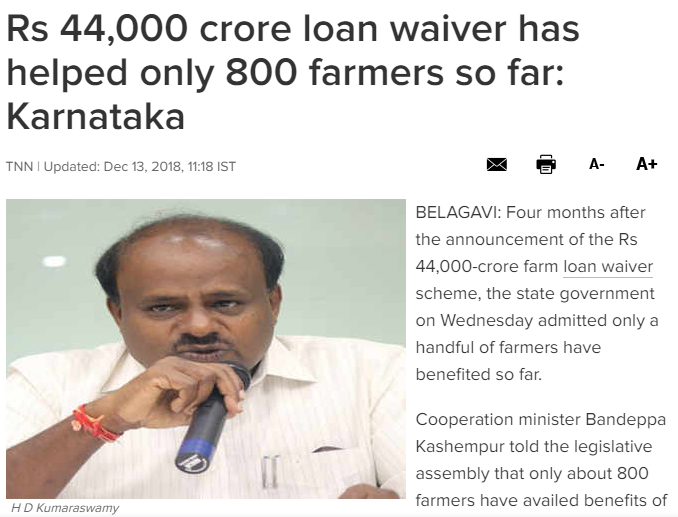 In report states that the Cooperation minister, Bandeppa Kashempur told the legislative assembly that only about 800 farmers have availed benefits of the scheme, announced by the CM on July 5.

Post this report, many media housed have presented different figures.  A report in NDTV published on December 19 states that almost 27,000 Karnataka farmers who have received their cooperative bank loan waiver certificates at a total cost of almost 150 crores. While Mint, in its report published on December 28 stated similar figures ( 27,242).

Meanwhile, in a report published on December 28, The Hindu said that about 70,000 farmers in the cooperative sector have benefited from the scheme, with the total waiver being around ₹348 crore.

So, this fact check shows us that PM has stated some outdated facts which are misleading.