US telecom regulators said that Swarm Technologies, the first company to ever launch satellites illegally, will pay a $900,000 settlement and submit to extra scrutiny ahead of future operations.

“Unauthorized deployment and operation of satellites risks satellite collisions and radio frequency interference, threatening critical commercial and government satellite operations,” the Federal Communications Commission (FCC) said in a statement. “To settle this matter, Swarm Technologies admits that it engaged in these unlawful acts, will implement a five-year compliance plan, and will pay a $900,000 civil penalty.” 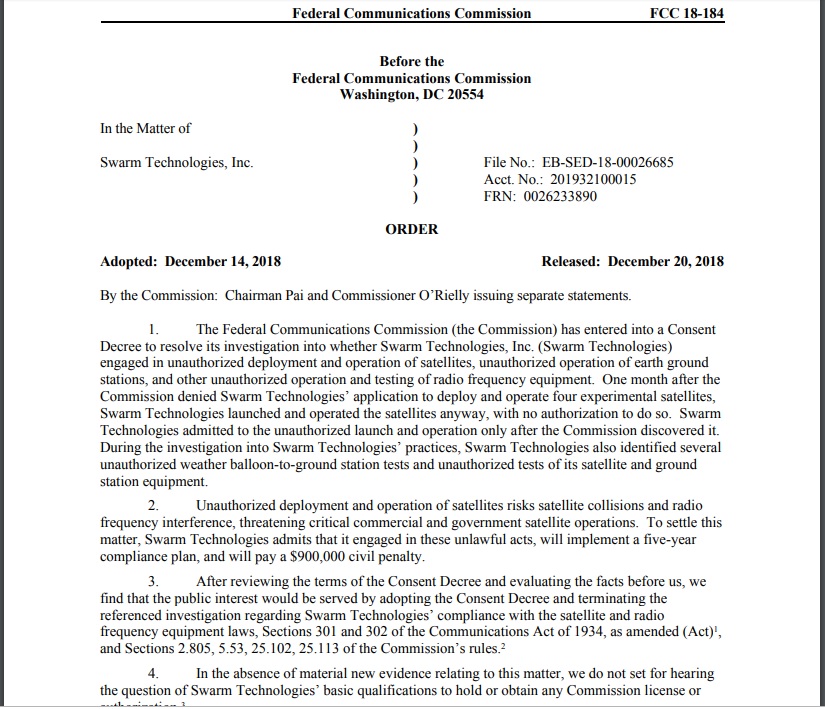 Swarm develops ultra-small satellites designed to form a space communications network. it was founded by aerospace engineers Sara Spangelo and Benjamin Longmier in 2017 and has funding from NASA, the US Navy, and the National Science Foundation.

“We accept the decision of the FCC as reflected in its consent decree and appreciate the FCC’s ongoing support for Swarm’s mission,” Spangelo said in a statement. “With the recent FCC authorized launch of three new Swarm satellites into low Earth orbit on the latest SpaceX Falcon 9 rocket, we move one step closer to enabling low-cost, space-based connectivity anywhere in the world.”

In January 2018, the company launched four satellites – SpaceBEE – satellites into orbit in defiance of the FCC’s denial of their application to operate the satellites, the Quartz reported. The agency had feared they would be too small to be detected in space, potentially raising the danger of collision.

In March 2018, the FCC discovered that Swarm had undertaken an illegal launch two months earlier, and began an investigation, which was handed over to its enforcement bureau in May, according to the report.

The consent degree released by the FCC reveals that after the January launch, Swarm communicated with its satellites for a week without official permission. According to the document, the company also conducted tests of its transmitters between a weather balloon and moving cars in Palo Alto, California, which is not legal without FCC permission, the report said.

FCC commissioner Michael O’Rielly says that even the new, higher penalty, is still inadequate. “The size of the penalty imposed is probably not significant enough to deter future behaviour, but the negative press coverage is likely to prevent this company and others from attempting to do this again,” O’Rielly said in a statement.