We all are aware of the craze of Indian youth towards PlayerUnknown’s Battlegrounds (PUBG), especially among college students. However, one of the engineering colleges in India is restricting its students from playing the game in its hostel. Authorities in charge of the men’s hostel in Tamil Nadu’s Vellore Institute of Technology (VIT) have issued a circular banning student from playing the game in their rooms.

A photo of the circular issued by the authorities was shared on Reddit and led to a full-fledged discussion. The notice stated: “It has come to our notice that few students are playing online games like ‘PUBG’ which is NOT PERMITTED.” 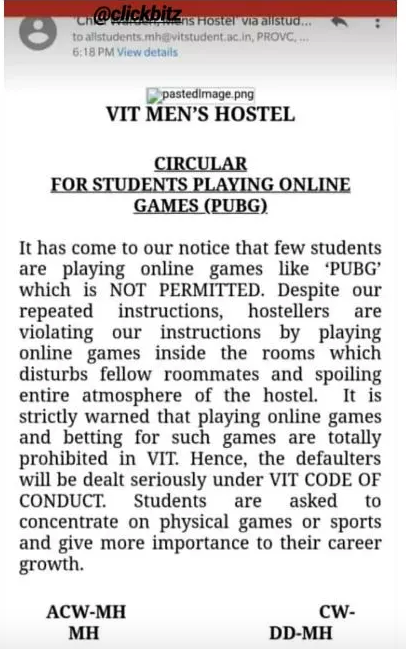 “Despite our repeated instructions, hostellers are violating our instructions by playing online games inside the hostel room which disturbs fellow roommates and spoil the atmosphere in hostel”, it further read.

It also warned residents of the hostel who fail to comply with the order with not be excused.

ALSO READ: China launches the first ever probe to explore the dark side…

“The defaulters will be dealt seriously under VIT CODE OF CONDUCT”, the circular read.

Earlier, IIT Madras is at the centre of a controversy after a hostel office allegedly put up a list of students on the notice board who were charged for using banned items inside hostel premises. The list also included the name of a student caught with “used condoms” inside his room.