Australia finished their Pool B campaign with a dominating 11-0 win over a hapless China in the ongoing Men’s Hockey World Cup here at Kalinga Stadium on Friday.

Beginning the proceedings early in the first quarter, the Aran Zalewski-led side won a penalty corner in the 10th minute through Jake Harvie, with forward Blake Govers making no mistake to open the scoring for Australia with a superb drag-flick dispatched into the roof of the net.

In the 15th minute, skipper Zalewski doubled the lead. As Chinese goalkeeper Wang Caiyu saved a Jeremy Hayward drag-flick, Dylan Wotherspoon latched onto the rebound and cut a pass to skipper Zalewski, who completed the goal at the far post.

The goals galore did not stop, as Tom Craig, in the 16th minute, scored Australia’s third goal soon after the start of the second quarter. Craig finished the goal from close range after Matt Dawson and Flynn Ogilvie exchanged one-touch passes on the left side. In the 19th minute, Govers scored his second and the fourth goal for Australia.

After having failed to convert from two successive penalty corners, the defending world champions made the third one count in the 22nd minute of the match as Jeremy Hayward placed his shot into the bottom right corner to bring up his side’s fifth goal. In the 29th minute, Jake Whetton added the sixth goal before going into half-time. Eddie Ockenden and Govers put Whetton through on the goal with just the Chinese goalkeeper to beat, with the forward emphatically finishing his job.

In the 33rd minute, Tim Brand continued the Australian onslaught with the seventh goal for his side, before Govers completed his hattrick in the 34th minute. Hayward pounced on a loose ball just outside the penalty area and passed it to Govers, who smashed it past a helpless Wang Caiyu to bring up his third and Australia’s eighth. Dylan Wotherspoon joined the party in the 38th minute as he hit the ninth goal for the World Champions before ending the third quarter. 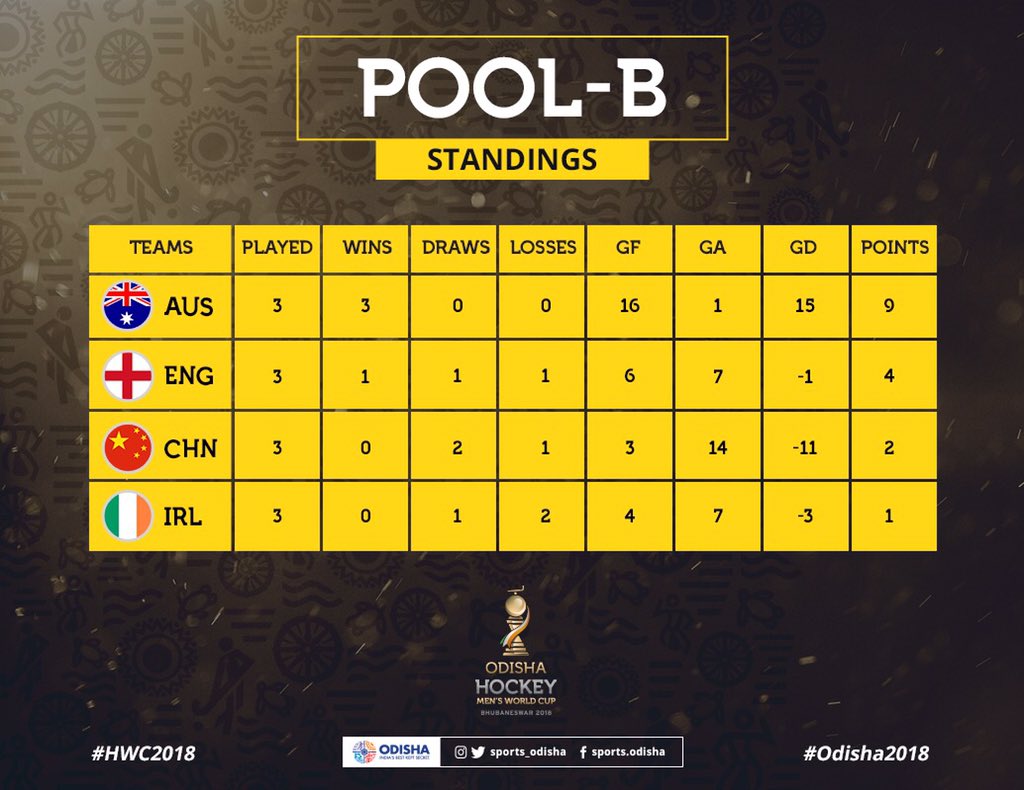 A defensive mix-up in the 49th minute resulted in Flynn Oglivie scoring the tenth goal for Australia. China’s first shot on goal finally arrived in the 52nd minute from their first penalty corner of the match, although it was easily saved by Australia’s keeper Andrew Charter. To seal the massive victory, Brand, in the 55th minute, rolled the ball into an empty net to complete the thrashing.

With the current standings, Australia, with nine points, have topped the Pool B table, while China, with two points, are at the second place. Meanwhile, Ireland and England, with a point each, stand at the third and fourth spot respectively.