Four women of Indian origin have made it to the Forbes list of America’s Top 50 women working in the technology space. This list identifies three generations of forward-thinking technologists leading more than a dozen tech sectors across the globe.

As a senior director at Uber, Komal Mangtani heads Business Intelligence, tracking customer service as well as financial interactions bolstering its $7.5 billion revenue. Previously, she served as vice president of engineering at Box, leading both the frontend and backend teams at the storage and productivity platform. At VMWare, she led product development on its cloud service products. Currently, she serves on the board of Women Who Code and led Uber’s $1.2 billion donation and partnership with Girls Who Code to increase access to computer science.

As a software engineer at LinkedIn, Neha Narkhede helped develop Apache Kafka, a platform that can process and organize the huge influx of data that comes from the site in real time. The data processing software platform became open sourced in 2011, and it has become the heart of Confluent, a company Narkhede founded with her LinkedIn coworkers to build tools for companies using Apache Kafka. The company has raised over $80 million in funding from investors like Sequoia Capital and Benchmark, and it counts Goldman Sachs, Netflix and Uber as customers.

As the number of devices people use on a daily basis — computers, laptops and smartphones — increase, advertisers need a way to show ads to a person across all their devices. Facebook and Google already offer these services to advertisers, but now they have a competitor with Kamakshi Sivaramakrishnan’s Drawbridge. Founded in 2010, the company uses large-scale AI and machine learning to identify the different devices people use based on data generated from their devices, like the WiFi network a person connects to. From there, Drawbridge calculates the probability that one person is using multiple devices. Drawbridge has raised $68.7 million from investors, including Sequoia Capital. Before starting Drawbridge, Sivaramakrishnan worked as a data scientist at mobile ad platform AdMob, which was acquired by Google in 2009 for $750 million, and received her PhD in information theory and algorithms from Stanford. 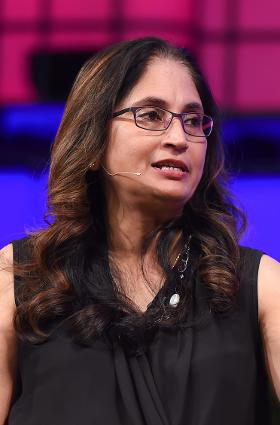 Having served in executive positions at both Motorola and Cisco, Padmasree Warrior is now U.S. CEO and chief development officer for Chinese electric autonomous vehicle startup NIO.
The former Cisco Systems chief technology and strategy officer left the company in 2015 when CEO John Chambers retired and SVP Chuck Robbins took over. In her seven years at the $138 billion technology company, Warrior helped Cisco grow in influence through acquisitions, including six in 2014 and 10 in 2013. The innovation pro has also been busy joining the boards of Microsoft and Spotify Warrior still finds the time to mentor other women in the tech industry, stay in touch with her 1.6 million Twitter followers and follow a nightly meditation routine. A Cornell-trained engineer, she believes a STEM education informs creativity: “Increasingly it’s not about knowing all the answers but asking the right questions and figuring out how to get the right answer.”