Congress leader Navjot Singh Sidhu who has been surrounded with controversies has become a part of another one as a day after the Kartarpur Corridor foundation stone-laying ceremony where he shared the stage with Pakistan Prime Minister Imran Khan and Pak Army Chief Qamar Javed Bajwa, he held a closed-door meeting with Hafiz Saeed aide and pro-Khalistani leader Gopal Singh Chawla on Thursday.

Reportedly, Gopal Singh Chawla, an aide of the 26/11 terror attack mastermind and Lashkar-e-Taiba founder, took to his social media and even shared a picture with Punjab minister Sidhu in which he referred to him in as his ‘brother’. This came in after Punjab Chief Minister Captain Amarinder Singh had named Chawla as a terrorist. 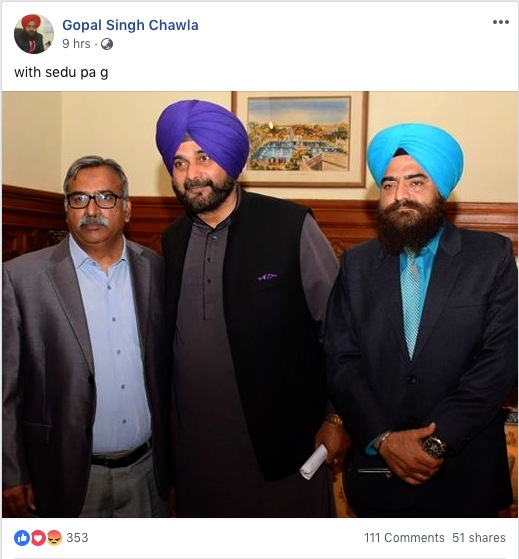 In his ‘personal capacity’, Navjot Singh Sidhu had attended the Kartarpur foundation stone-laying ceremony, even as Punjab CM Capt. Amarinder Singh was not in favour of his visit to Pakistan, having declined his own invitation citing the terrorism that Pakistan so regularly perpetrates from its soil onto India.

On Wednesday, during the groundbreaking ceremony of the Kartarpur corridor in Pakistan, Navjot Singh Sidhu once again met Pak Army chief Bajwa three months after their infamous hug at Imran Khan’s swearing-in. This time, Sidhu made it a point to shake hands with and speak General Bajwa. Sidhu was subsequently given chief-guest treatment at the ceremony, sitting right next to Imran Khan and Pak foreign minister Shah Mehmood Qureshi, whereas the government of India’s official representatives, union ministers Harsimrat Kaur Badal and Hardeep Singh Puri were seated further away.