After declining the invitation of the Pakistan Foreign Minister to attend the foundation stone laying for Kartarpur Corridor on the Pakistani side of the border, the Punjab chief minister Capt Amarinder Singh on Monday warned Pakistan and said they will not be allowed to enter Punjab and vitiate the environment.

On Sunday he had declined Pakistan’s invite on the grounds that Pakistan continued terrorist attacks in the state and killed Indian soldiers.

#WATCH I am warning you(Pakistan Army Chief Qamar Bajwa), we are also Punjabis, you will not be allowed to enter here and vitiate the atmosphere: Punjab Chief Minister Captain Amarinder Singh pic.twitter.com/ACk82SYHRg

Meanwhile, the Vice President M Venkaiah laid the foundation stone for the construction of Dera Baba Nanak-Karatarpur Sahib road corridor, which will reach up to the international border with Pakistan in the Mann village of Gurdaspur district in Punjab.

ALSO READ: Lest we forget, Remembering 26/11

“I must tell what Punjab CM said, that we can’t allow terrorism & can’t let innocents die, this isn’t going to help, it’s not the way; it must be understood. That’s why let this be the start of this great event,” Naidu at the foundation ceremony of the Kartarpur Corridor.

Earlier in the day was Punjab Minister Sukhwinder Singh Randhawa black-taped names of Chief Minister Captain Amarinder and his state cabinet colleagues on the plaque.

Randhawa also struck-out his name using black tape. “I did this as a mark of protest against Parkash and Sukhbir Badal’s names on the stone. Why is their name here? They are not part of the executive, it is not a Bharatiya Janata Party-Akali event,” he told ANI. 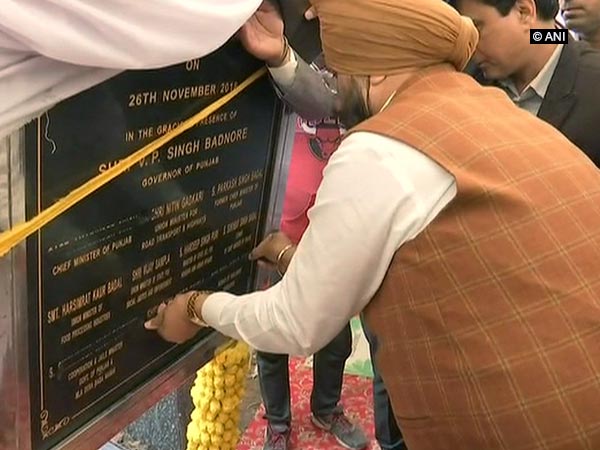 Hitting out at Union Minister Harsimrat Kaur Badal for accepting Pakistan’s invitation to attend the groundbreaking ceremony of the corridor in the neighbouring country, Singh said: “Harsimrat Kaur Badal had called Navjot Sidhu a ‘qaum ka gaddar’ (one who betrayed the community), now she herself is going to Pakistan, with what face will she go? Akali Dal had not taken up Kartarpur Corridor issue even once when they were in power.”

The decision to build the corridor from Dera Baba Nanak to the International Border was taken on November 22 by the Union Cabinet. A day later, Pakistan’s Foreign Minister, Shah Mahmood Qureshi, had announced that Pakistan’s Prime Minister Imran Khan would take part in the ceremony on November 28 in his country.

The development of the corridor will facilitate lakhs of pilgrims from India to visit Gurdwara Darbar Sahib Kartarpur on the banks of river Ravi, in Pakistan, where Guru Nanak Dev spent 18 years.

The Indian Ministry of External Affairs (MEA) had issued a Note Verbale to the Pakistani Government, urging it to develop a corridor with suitable facilities in its territory from the International Border to Gurudwara Kartarpur Sahib to facilitate easy access and passage of Indian pilgrims throughout the year.

The Pakistan Government on November 23 had extended an invitation to External Affairs Minister Sushma Swaraj, Amarinder Singh and Punjab cabinet minister and former cricketer Navjot Singh Sidhu for the event.

The invitation was, however, declined by Swaraj citing her prior commitments pertaining to election campaigns. Minister for Food Processing Industries Harsimrat Kaur Badal and Minister of State (IC) for Housing and Urban Affairs Hardeep Singh Puri would be representing the Indian government, she said.