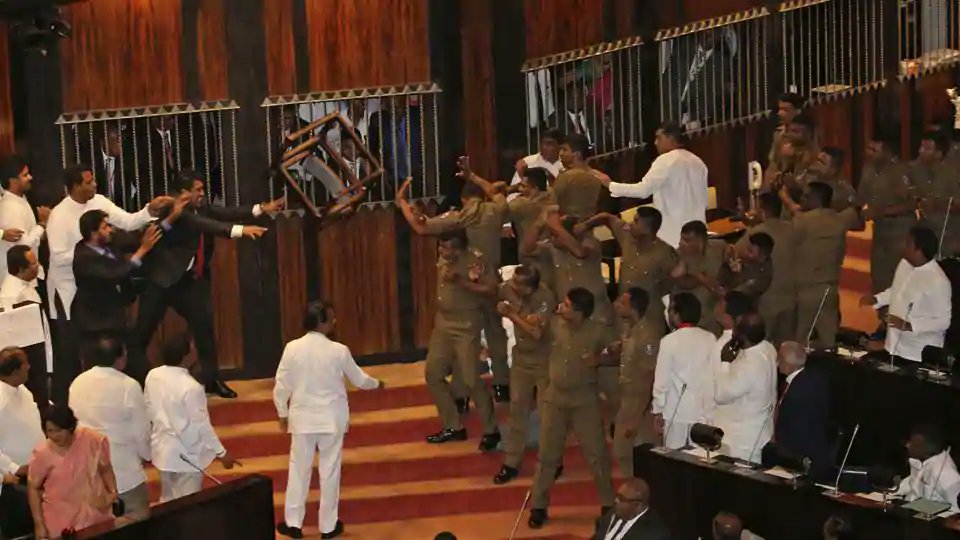 Srilankan Parliament was disputed for the second day with lawmakers throwing the book, furniture and chilli powder to stop the second no-confidence motion against the Prime Minister Mahinda Rajapaksa.

When the situation got out of the hands, Speaker Karu Jayasuriya had to summon police inside the House.

PARLIAMENTARY BRAWL- Clashes took place in Sri Lanka’s Parliament as MPs attempted to disrupt a no-confidence motion – throwing books, chilli powder and water bottles at the House Speaker; Sri Lanka is embroiled in a political crisis where neither side can agree on a leader (PTV) pic.twitter.com/yPJ8N0zkyP

Supporters of Prime Minister Rajapaksa were seen throwing and breaking chairs to prevent speaker Jayasuriya from conducted a voice vote on revised no-confidence passing a no-confidence motion against Rajapaksa.

However, the violence could not stop the house from passing the motion and dismissing Rajapaksa’s government for the second time in a week.

On October 26, Srilankan President Maithripala Sirisena sacked PM Ranil Wickremesinghe and appointed former president Mahinda Rajapakse as the new Prime Minister. Since then the nation as been undergoing a political turmoil.