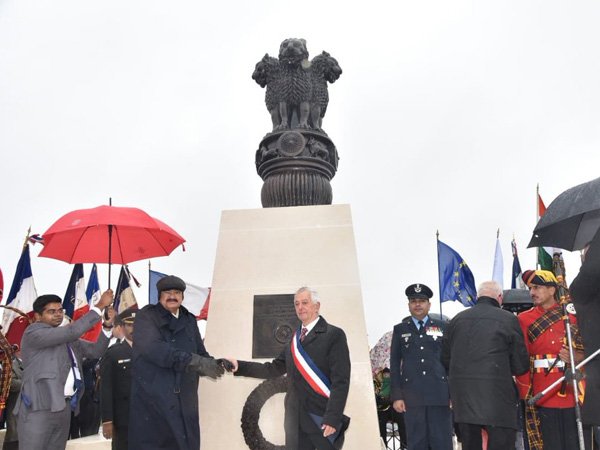 Vice President M Venkaiah Naidu inaugurated the Indian War Memorial at Villers Guislain in France on Saturday and said that India contributed immensely to the war effort during the World War I.

The main motif of the Indian War Memorial at Villers Guislain is the Indian national emblem which consists of Ashoka lions along with a bronze wreath, plaque, and lances which have been designed in India.

Speaking during the inaugural function, the Vice President spoke about the importance of the memorial, terming it as a tribute to the Indian soldiers who sacrificed their lives fighting selflessly during the World War I.

“I consider it my privilege to have this honour to be amongst you today and inaugurate the first War Memorial constructed by the Government of India in France and to pay homage to the Indian soldiers who fought selflessly and heroically during World War I and made the supreme sacrifice,” Vice President Naidu said during the event which had Mayor of Villers Guislain Gerard Allart, and other distinguished guests in attendance.

“India contributed immensely to the war effort in terms of both men and material. Her soldiers served with credit and honour in numerous battlefields around the globe: in France and Belgium, in Aden, Arabia, East Africa, Gallipoli, Egypt, Mesopotamia, Palestine, Persia and Salonika,” he added, while bringing attention to the 100th anniversary of the Armistice Day that marks the end of the World War I.

Further recalling the contributions made by the Indian soldiers, the Vice President stated, “The first Indian troops landed in Marseille on September 26, 1914. Over the next five years of the Great War, more than 140,000 Indian soldiers fought the War on this same land (present day France and Belgium) where we stand today. They reached here in the extreme winters of Europe, had no winter clothing but fought gallantly, earning battle honors for themselves, their regiments and for India. More than 9,300 of them made the ultimate sacrifice in Belgium and France.”

He remarked, “We, therefore, share a bond of sacrifice that joins us to French soil and society. The final resting places of these soldiers are spread over 158 cemeteries across various communes and cities of France. The Indian Memorial at Neuve Chapelle built by the Commonwealth War Graves Commission is a place where 4,300 brave Indian soldiers died in one night. Their blood is permanently mixed with the soil here.”

Vice President Naidu opined that the sacrifices made by Indian soldiers during World War I cannot be erased. “Although it was not a war that India was involved with directly, the valour of the Indian soldiers and the duty they stood for, leaving behind their kith and kin, is a memory that can never be erased. They fought for human liberty and freedom,” he said.

ALSO READ: India clarifies; talks in Moscow on Afghanistan, not with Taliban

“Even today, India continues to be one of the largest contributors to the United Nations Peace Keeping Missions in the conflict zones of the world. The sons and daughters of India have always stood on the side of righteousness even when confronting the toughest adversities and have fought gallantly and laid down their lives to uphold and promote these cherished ideals, in the far-flung corners of the world. Their sacrifice can best be phrased in their own words: “When you go home, tell them of us and say, that for their tomorrow, we gave our today,” he said.

Vice President Naidu added, “As you are aware, the Battle of Cambrai was fought on this very piece of land that you are standing upon today from the morning of November 20, 1917 till December 4, 1917. Over 40,000 soldiers had died during that battle, including many Indians. It was almost 100 years back on this same soil that the Indian Cavalry comprising the Deccan Horse, Hodson’s Horse, Poona Horse, Central India Horse and 18 Cavalry had charged at German positions during the Battle.”

“This Indian memorial in Villers Guislain would stand tall as a towering manifestation of our continuous efforts to express solidarity with France in remembering the martyrs of the First World War,” he noted.

ALSO READ: Relief for India: Chabahar Port gets US waiver

Vice President Naidu further expressed his deepest gratitude to Mayor of Villers-Guislain for gifting land to the Government of India for the memorial’s construction and his continued cooperation in the completion of the construction. Hoping for long-lived relations between India and France, Vice President Naidu concluded his speech by appreciating all the efforts which went into the making of the monument.

The Vice president further mentioned, “I would also convey my deepest appreciation to all the local and regional authorities of the French Republic and the Commonwealth War Graves Commission for their assistance and close collaboration.”

Lastly, he thanked the crowd for gathering for the inauguration ceremony. “My special thanks are also due to you all who are present here today at this ceremony to pay homage to the fallen soldiers of my country. This demonstrates your truest and most sincere appreciation of these soldiers and ensures that their sacrifices are not forgotten by anyone on this land,” Vice President Naidu said.