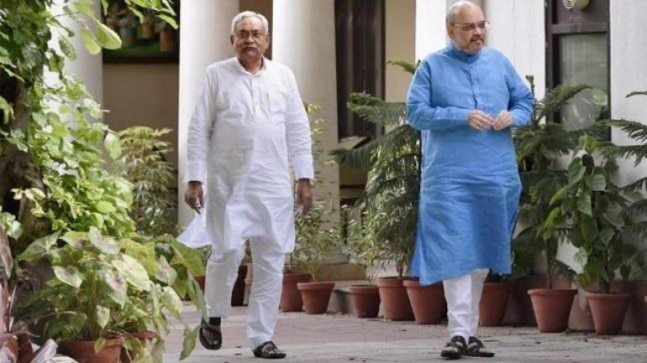 New Delhi: With election clouds hovering over the nation, the BJP and the JD(U) on Friday announced that both the parties will contest an equal number of seats in Bihar in the 2019 Lok Sabha polls.

BJP chief Amit Shah and Bihar chief minister Nitish Kumar in a joint presser which was followed by a meeting announced the seat-sharing formula.

“It has been decided that BJP and JDU will fight on equal number of seats for Lok Sabha Elections 2019 in Bihar. Other allies will also get a respectable seat share,” BJP president Amit Shah said after the meeting.

ALSO READ: Rahul, others arrested after they ‘Gherao’ CBI HQ in Delhi

The BJP chief said that the actual numbers will be announced in the coming days.

“Upendra Kushwaha and Ram Vilas Paswan will remain with us. When a new ally has joined us, there will be a reduction in seat share for everyone,” BJP chief added.

The BJP-LJP-RLSP combine had won 31 Lok Sabha seats in 2014, while the JD(U) could manage to win only two seats