Days after the tragic Amritsar train tragedy in which at least 60 people died, a picture and multiple videos of a man committing suicide, by hanging from a bridge, has gone viral on social media. The claim – the man committing suicide is the driver of the train which mowed down people in Amritsar while they were celebrating Dussehra. 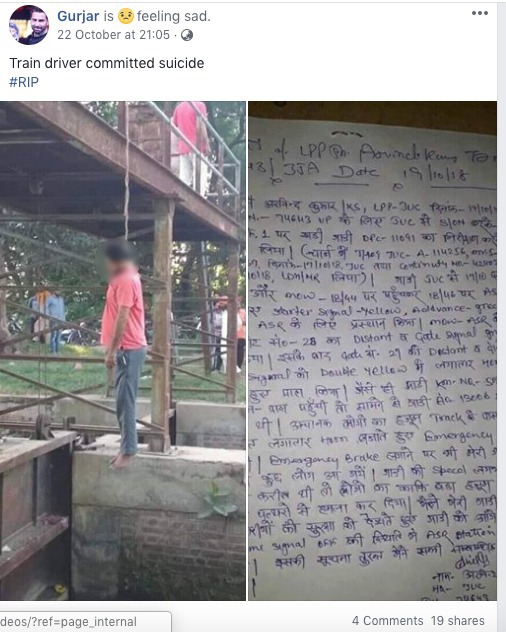 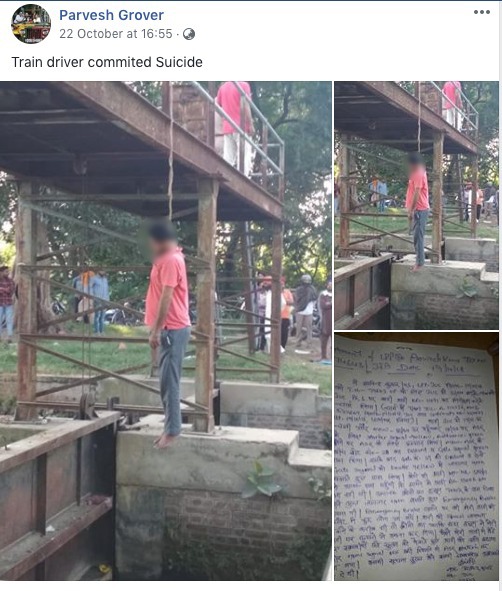 ALSO READ: FAKE Alert: This woman is not the one who shot the…

When NewsMobile fact-checked the claim we found out that the man who committed suicide is not the driver of the train as claimed on social media. The suicide was reported on October 22nd from Tarn Taran in Punjab

“This suicide is no way related to the train tragedy. This man was in depression from last four months” SHO Gurwinder Singh of Chattiwind police station was quoted by Alt News.

An article published by Dainik Jagran on October 22, 2018, confirmed that the body hanging from a trap near Bohdu village was of a resident, named Paramjeet, from Bhikhwind, Tarn Tarn. The possible reason for suicide, according to the newspaper, was Paramjeet’s mental illness.

Moreover, the viral post also has a picture a letter, which it claims to be the suicide note. NewsMobile confirms that the letter, in the picture is in fact, the statement given by the train driver to the police and NOT a suicide note.

Saw a crowd of ppl around track. Immediately applied emergency brakes while continuously blowing horn. Still some ppl came under it.Train was about to stop when people started pelting stones & so I started the train for passengers’ safety:DMU train’s driver.#AmritsarTrainAccident pic.twitter.com/2dihtcO9Ri