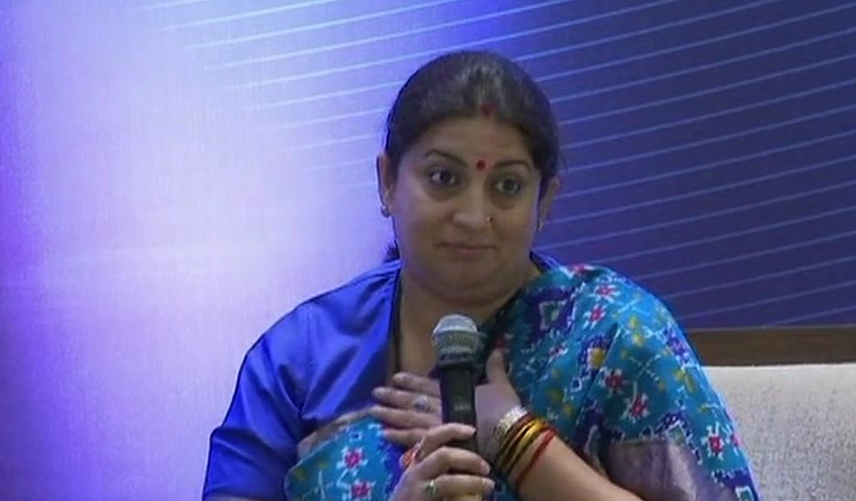 Mumbai: Union minister Smriti Irani on Tuesday sparked a controversy when she spoke on the issue of allowing women of all ages entry into the Sabarimala temple.

The Supreme Court, in a landmark verdict, recently threw open the doors of Sabarimala temple in Kerala to all women; earlier women of menstruating age were barred entry to the temple, which is the abode of Lord Ayyappa, who is considered to be celibate.

Smriti Irani while speaking at the event recalled how she has once barred entry into a fire temple in Mumbai. (Non-Parsi women are not allowed to enter fire temples.)

Irani said that back then she accepted the rule and respected it by not entering the temple.

She further said that ” I have the right to pray, but no right to desecrate. I am nobody to speak on SC verdict as I’m a serving cabinet minister. Would you take sanitary napkins seeped in menstrual blood into a friend’s home? No.Why take them into the house of God?”

#WATCH Union Minister Smriti Irani says,” I have right to pray,but no right to desecrate. I am nobody to speak on SC verdict as I’m a serving cabinet minster. Would you take sanitary napkins seeped in menstrual blood into a friend’s home? No.Why take them into house of God?” pic.twitter.com/Fj1um4HGFk

“You would not,” the Union minister answered, continuing, “And would you think that it is respectful to do the same when you walk into the house of god?”

When a twitter user slammed Irani on her comments, she called it Fake news.

Fake news …… calling you out on it. Will post my video soon. https://t.co/ZZzJ26KBXa

Irani in a series of tweets to explained her comments:

I respect that stand by the Zoroastrian community / priests and do not approach any court for a right to pray as a mother of 2 Zoroastrian children. Similarly Parsi or non Parsi menstruating women irrespective of age DO NOT go to a Fire Temple.

These are 2 factual statements. Rest of the propaganda / agenda being launched using me as bait is well just that … bait.

As far as those who jump the gun regarding women visiting friend’s place with a sanitary napkin dipped in menstrual blood — I am yet to find a person who ‘takes’ a blood soaked napkin to ‘offer’ to any one let alone a friend.

But what fascinates me though does not surprise me is that as a woman I am not free to have my own point of view. As long as I conform to the ‘liberal’ point of view I’m acceptable. How Liberal is that ??