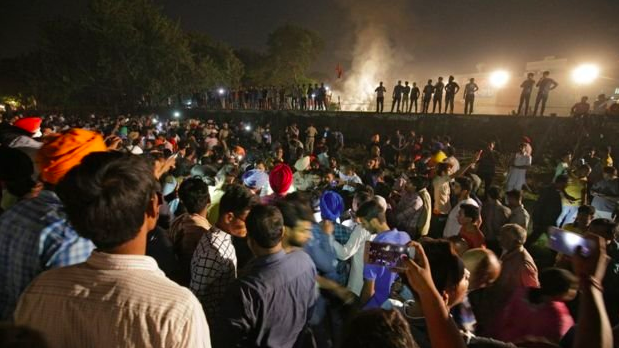 Amritsar: Punjab Chief Minister Captain Amarinder Singh on Saturday announced that a magisterial inquiry under Divisional Commissioner of Jalandhar will be conducted to ascertain the cause of the train accident in which 59 people died on Friday evening. The Chief Minister has sought the inquiry report within four weeks.

The chief minister told the media, “We are initiating a magisterial inquiry under Commissioner to find out the reasons for this mishap. He will submit a report within four weeks. Divisional Commissioner of Jalandhar will be conducting the inquiry.”

The train accident took place yesterday evening in Choura Bazar near Joda Phatak area of Amritsar after a speeding train, bound for Amritsar, ran over people who were watching Dussehra celebrations from the incident spot.

On action against the organisers of the Dussehra event, Captain Amarinder Singh said, “I cannot pre-judge anything, we have initiated an inquiry. We are giving four weeks of time to reach a conclusion on every aspect.” He visited the Civil Hospital in Amritsar where the injured have been admitted.

“In this tragic accident 59 people were killed and 57 injured. We had already announced one-day state mourning and at Amritsar, the mourning period will be of three days, school and colleges will remain closed and flags will fly at half mast. Except for nine deceased, rest of the bodies have been identified and we hope that by this evening they will also be identified,” the chief minister said.

He also informed about the compensation being provided to the victims of this accident. “For compensation, we have already announced Rs 5 lakh to the kin of all deceased. Medical treatment is being provided free of cost at all the hospitals. For all those who are injured in a way that will require long-term treatment, we will give Rs. 50,000 as compensation. We have already released Rs. 3 crore to DC (District Collector) Amritsar for payment of ex-gratia to the families of the deceased,” he said.