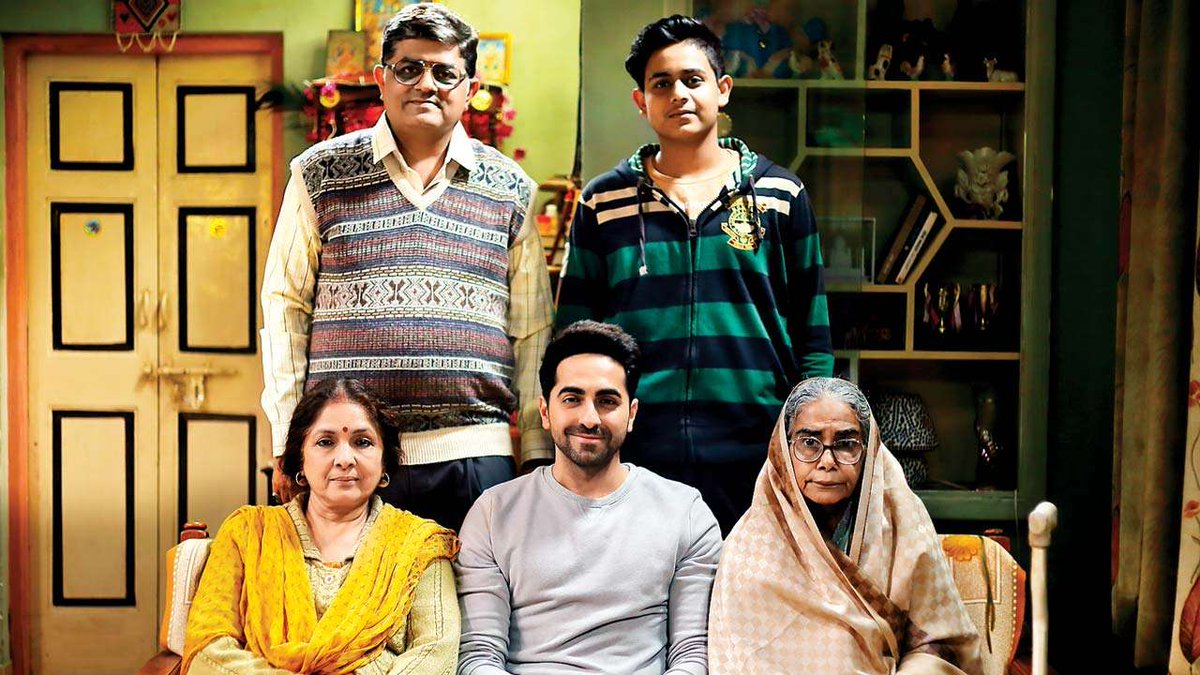 The much anticipated, much awaited baby arrives ..and its as bonny as we expected. Badhaai Ho! This comedy drama is about a middle aged couple who are expecting a baby when their son is of a marriageable age and how their life is effected by it .

Cinematographer Sanu Verghese ( Wazir, David ) seems to be a man who knows not only his camera but also the faces in front of it . He knows how best to capitalise whose expressions and he had aces up his sleeve like Gajraj Rao and Neena Gupta.

Screenplay by Akshat Ghildial is superb with good dialogues and detailing.

And just as a perfect icing on the cake, we have award worthy performances by the superb cast.

I would say the main stars of the film are Gajraj Rao and Neena Gupta who play the parents to Ayushmaan.

Gajraj Rao who we have so far seen in small roles like in Blackmail and Talvar was just waiting for a meaty and deserving role to prove his mettle.

His performance will be blow u away .. as a doting, admiring husband, as a respectful son and a loving father. His embarrassment , his sheepishness, his male pride, those stolen admiring and loving glances at his wife . No one could have done it better.

Neena Gupta , is as much a darling as she is the queen of subtle,natural expressions and elegance. She’s plays perfect as the quiet , soft spoken, caring and loving woman but resolute when needed. Her silence,shyness,pain, concern and her love , all is conveyed with very few words. Surekha Sikri plays the outspoken, fiery grandmother and just wins our hearts with her antics.

Ayushmaan as I said before is on a winning spree. He seems to get it right all the time.

Sanya is a good support in her small role.

Sheeba Chaddha plays Sanya’s upper class stylish mother, has dialogues that can be counted on fingers, but man ! .. that woman can emote with just her eyes .

The songs have good music and good lyrics which help in swaying us to emotions just the way director wanted.

And the background score by Abhishek Arora was superb and worth a mention. Notice how it just builds up the right mood at the right moments.

The pace and editing have no sags except the young stars’s love track which is basically a side track. The story begins with a peep into middle class life of the family and soon enough, the much awaited catastrophe strikes the family. The transformation from shock and peevishness of the near ones gradually turns to understanding and support.

And this rollercoaster of emotions is something we thoroughly enjoyed right till the overwhelming climax with lots of tears and lots of smiles .

This film is every bit worth your time and money. Watch it for the chuckles, the tears and the award winning performances.

Score 8 plus 1 ( exclusively for Gajraj Rao and Neena Gupta )