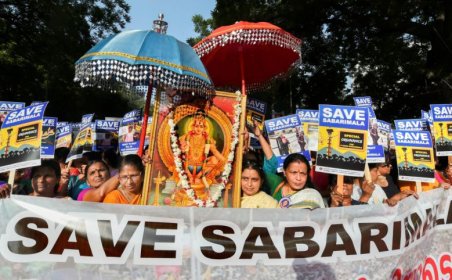 The doors to Kerala’s Sabarimala temple opened on Wednesday for the first time since the Supreme Court allowed women of all ages to enter the hilltop shrine, three weeks ago. However, protesters halted female devotees between 10-50 years from entering the shrine, intimidated journalists and clashed with the police.

Protesters turned away at least two female devotees who tried to enter the shrine, maintaining a centuries-old tradition that women of menstruating age cannot enter the temple because the presiding deity, Lord Ayyappa, is celibate.

The 800-year-old temple opened at 5 pm with the chanting of hymns for a five-day ritual. Several television channels reported that hardliners targeted women journalists and attacked the vehicles of their crews. Women reporters of two national TV channels were stopped in Pamba by a violent crowd, which was seen banging on their cars. Television footage showed policemen chasing protesters away through dense forests near Nilakkal.

“Police were forced to intervene when some protesters started attacking media personnel,” said district collector PB Nooh, stressing that the administration will make sure the pilgrimage was not affected. State industry minister EP Jayarajan said those who attacked journalists will be arrested.

Kerala Minister VS Sunil and CPI(M) general secretary Sitaram Yechury strongly condemned the protests opposing entry of women of all ages into the Sabarimala temple. Alleging that the Bharatiya Janata Party of making it a law and order issue, Kerala minister VK Sunil told ANI: “Rashtriya Swayamsevak Sangh (RSS) and BJP are taking double standards. On the one hand, five advocates associated with the BJP gave a petition in the Supreme Court over entry of women of all ages into Sabarimala temple. On the other hand, BJP is leading a fight against the verdict, and now they are trying to make it as a law and order issue.”

Policemen deployed in strategic areas did not seem to be a deterrent to the hundreds of protesters, who damaged at least 10 buses. Twelve people were arrested and 15 hospitalised with injuries suffered during the clashes, the police said. Fearing a flare-up, the district administration imposed restrictions prohibiting the gathering of more than four people under Section 144 of CrPC in trouble-hit areas, including Nilakkal and Pamba.

On Wednesday morning, Congress party leaders had organised a peaceful protest in Nilakkal against the entry of women into the temple. Over 50 people, including former Travancore Devaswom Board president Prayar Gopalakrishnan, were taken into custody in Nilakkal and Pamba, both Sabarimala base camps for protesting against women’s entry into the Lord Ayyappa shrine.

Yechury lashed out at the Congress for staging a protest. He told ANI, “This is most unfortunate. Sadly, Congress’ local unit has also joined the protest whereas the Congress in the centre (Delhi) had welcomed the judgement of the Supreme Court. This has exposed their duplicity.”

Further sharpening his attack, he alleged that the BJP and RSS are deliberately arousing passions for electoral gain. He added, “If at all BJP and RSS are against the verdict, the only way available to circumvent the verdict is through a legislative procedure in Parliament. If they are really serious to circumvent the verdict then this is the route. Why are they not taking that route? This is clearly a game of communal polarisation.”

Senior BJP leader Subramanian Swamy told ANI that he strongly endorsed women’s entry into Kerala’s Sabarimala temple. He further asserted that it is wrong to go against the Supreme Court’s verdict. The apex court had allowed the entry of women of menstruating age inside the temple premises.