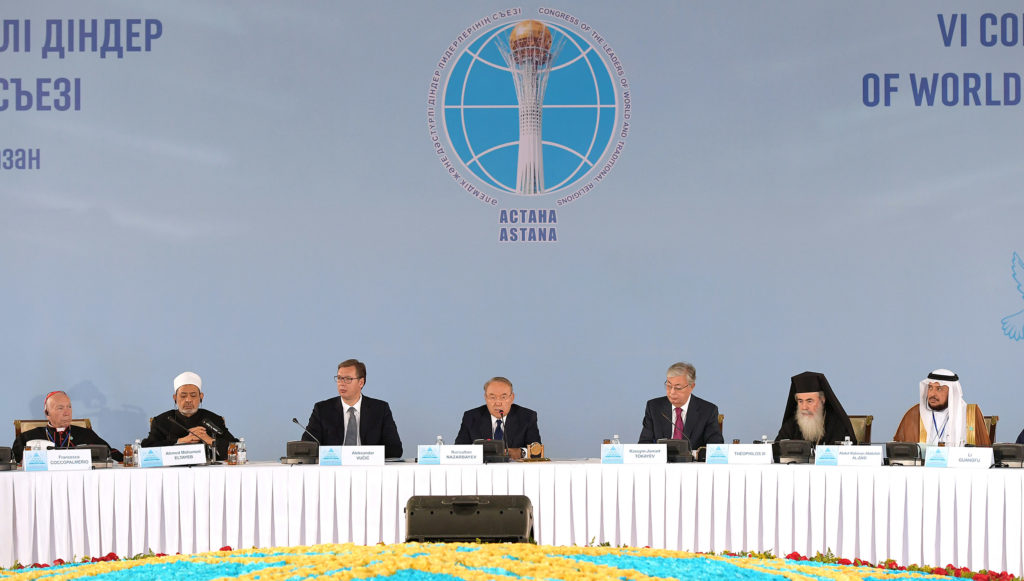 Astana: In a bid to share the cultural and religious ideologies, the Kazakistan capital hosted the sixth Congress under the subject of ‘Religious Leaders for a Secure World’.

– The manifesto ‘The World. The 21st Century’ as a “concept of global security”.

– Religions in changing geopolitics: new opportunities for the consolidation of humankind.

– Religion and Globalisation: Challenges and Answers.

– Religious leaders and politicians in overcoming extremism and terrorism.

“In the three years since the last Congress, important global events have taken place in the capital of Kazakhstan. The decisions adopted in Astana had a wide international resonance since they were instilled with the idea of peacekeeping, partnership, tolerance, creation,” Kazakh President Nursultan Nazarbayev said.

The first Congress of Leaders of World and Traditional religions took place Sept. 23-24, 2003 at the initiative of Kazakh President Nursultan Nazarbayev.

Its objectives are to seek universal guidelines among the world and traditional religions and to be a permanent platform for international interfaith dialogue.

“All of this is especially important since the world, to our great regret, has entered a turbulent state. All of us, including politicians, and religious leaders, cannot but be concerned by the use of sanctions, inter-religious and intra-religious conflicts, trade wars, environmental pollution,” Nazarbayev added.

“Inter-civilisational conflicts look absurd against the backdrop of scientific and technological progress. But at this very moment the shape of the future of humanity is being formed. In what condition will we pass on our common planet to future generations – this is the main civilisational problem,” President Nazarbayev said.

“We have already been living in the third millennium for 18 years, but peace, prosperity and wealth have not become the main trend of human development. The world community has not been able to get out of the sinister circle of mutual distrust, hostility and conflict,” Kazakh President Nursultan Nazarbayev further said.