Home Auto ‘Made in India’ Maruti Suzuki not so safe after all; scores 2... 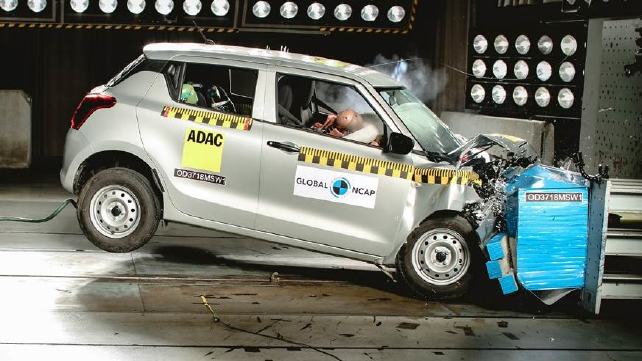 The Global New Car Assessment Program (GNCAP) released the results of the the India- produced Maruti Suzuki Swift Crash Tests which turned out to be really disappointing.

The GNCAP released the result for the Maruti Suzuki Swift as a part of its ‘Safer Cars For India’ crash test campaign. The Swift scored two out of five in the crash tests.

ALSO READ: Hold your breath as your favourite hatchback makes a comeback!

According to GNCAP, the car lacks on the adult safety front. As stated in the reports, the bodyshell of the Swift is unstable and it cannot withstand very strong impacts. While impact, the car offers good protection to the head and neck of the driver as well as the the co-driver, but the chest and knee areas were left with inadequate protection because of the structures behind the dashboard that could impact dangerously.

The Swift does offer some good safety features like dual airbags, seat-belt pre-tensioner along with ISOFIX anchorages but the lack of the 4-channel ABS (Anti-lock Braking System) makes one of the key reasons for attaining a poor rating. The car scored two stars for child protection as well.

“The latest version of the Swift sold in India has improved and it is good to see dual airbags as standard. This confirms the beneficial effect of the Indian Government’s new crash test regulations. But the performance of the Swift sold in Europe and Japan shows that a better safety performance is still possible so Global NCAP would like to see Maruti Suzuki aim higher”, David Ward, Global NCAP Secretary General said.

The ‘Made in India’ Maruti Suzuki Swift offers neither side body and curtain airbags nor electronic stability control, even as an option. All these features are standard for Europe, hence the low rating for the car.