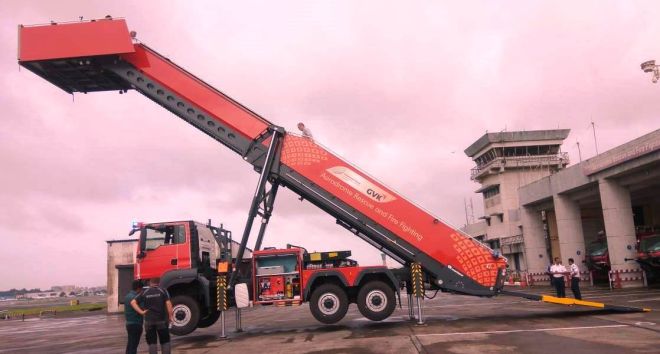 The Mumbai International Airport (MIAL) has inducted the Emergency Evacuation Vehicle (EEV) in its fleet and has become the first airport in the country to get such an advanced evacuation vehicle.

This step was taken in order to make access to an aircraft faster during emergencies. It can the largest of passenger aircrafts including the Airbus A380, the largest civilian aircraft in operation at present.

Though this is the seventh emergency evacuation vehicle at the airport, it offers better access to the aircraft and can speed up the evacuation process in an emergency.

The EEV has frame foundation of a MAN chassis by the Austrian fire-service manufacturer Rosenbauer. The truck comes with an extendable escape staircase that can reach up to a height of 27.2 feet. The extension time for the staircase is a smooth 55 seconds and is also equipped with a high-pressure smoke ventilation system. It is capable of holding up to 115 people at once.

The EEV is back- up vehicle in case the internal evacuation system on the aircraft fails to work and is a safe and effective way to extract passengers in an emergency. The closed side panels on the entire stair and platform area increase safety and prevent hazards of falling.

The EEV is equipped with a simple user interface making it possible for one person to control all the actions, while a roof monitor offers a wide visibility up to 300 feet. The vehicle is one of its only kind in the Mumbai airport Aerodrome Rescue and the firefghting department, which can access the tail engine in case of a fire.

The Rosenbauer EEV has a powertrain of a MAN Euro 6 SCR engine that churns out for 337 bhp and can hit 0-80 kmph in 30 seconds. A 3-axle, 6×6 setup enable the escape stairs truck capable of being driven on uneven surfaces without compromising on ride quality of speed. The EEV can attain a top speed of 105 kmph.