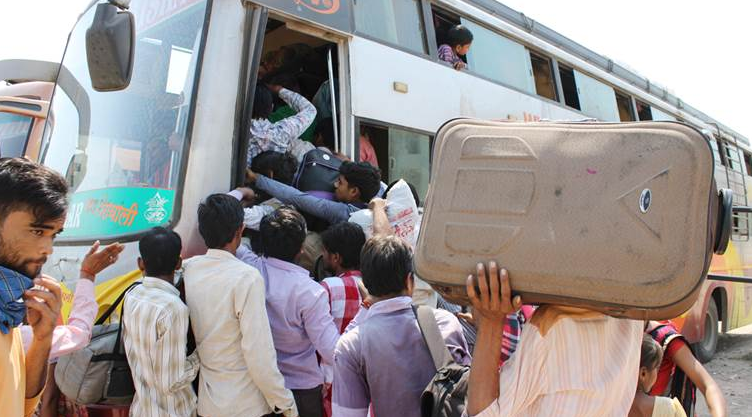 Hundreds of migrant labourers from Bihar, Uttar Pradesh and Madhya Pradesh are fleeing India’s western state of Gujarat after massive protests and mob attacks against them in connection to the alleged rape of a 14-month-old child earlier last week.

According to reports, the police said that the workers were targeted in few parts of the state after hate messages against non-Gujaratis, particularly those from Bihar and UP, were circulated on social media.

On September 28, a 14-month-old toddler, who belonged to the Thakor community, was allegedly raped in a village near Himmatnagar town of Sabarkantha district, around 100 km from Ahmedabad.

Ravindra Sahu, a labourer hailing from Bihar and working in a local ceramic factory, was later allegedly arrested for the rape by the police. Following the arrest, the Kshatriya Thakor Sena said migrant workers from other states should not be given jobs in Gujarat. A 200-strong mob, allegedly led by Thakor Sena members, stormed a factory near Vadnagar town of Mehsana district on October 2 and thrashed employees.

Similar incidents took place in Mehsana, Gandhinagar, Sabarkantha, Patan and Ahmedabad districts, said the Director General of Police Shivanand Jha. While a migrant worker said, “We were attacked by Thakor Sena members last night at Kalol town of Gandhinagar. This is an injustice to us. That is why we are going back to our native places as we feel unsafe here.”

ALSO READ: Asked to get off the phone, Uber driver threatens to rape…

At least 170 persons have been arrested so far in connection to the attacks.

“I have written to the chief justice with request to set up a special fast-track court so that trial in rape cases at Himmatnagar (in Sabarkantha district) and Surat are held there and completed in a month or so,” Patel said, adding that “harshest punishment” has been sought for the accused, including capital punishment.