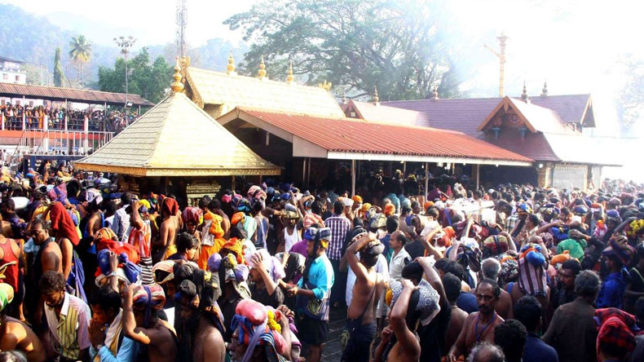 Extending their support to the devotees, the Rashtriya Swayamsevak Sangh on Wednesday slammed Kerala government for immediately implementing the Supreme Court verdict on the entry of all women into Sabarimala temple.

Prior to this, Chief Minister of Kerala, Pinarayi Vijayan had agreed to the decision of the court and said that his party will not file any review petition.

“Devotees have been divided since the beginning. The Supreme Court considered all divergent views before announcing the final verdict. Our government accepts the decision. No woman who wants to go to Sabarimala can be stopped,” Vijayan said.

ALSO READ: We accept the decision, no woman will be stopped: Kerala CM on Sabarimala verdict

Criticising Kerala CM for his hasty decision, the RSS said that while they respect the Supreme Court’s verdict, the sentiments of devotee’s should not be ignored.

“Unfortunately, the Kerala Government has taken steps to implement the judgement with immediate effect without taking the sentiments of the devotees into consideration,” RSS said in a statement.

Backing the devotees, RSS added, “While the Supreme Court Judgement should be respected, Rashtriya Swayamsevak Sangh calls upon all the stakeholders, including spiritual and community leaders to come together to analyse and address the issue availing judicial options also. They must convey their concerns on their right to worship in a manner which best suits their faith and devotion, to the authorities in a peaceful manner.”

After the Supreme Court’s verdict, which allows entry for all women in Sabarimala Temple, several protests were witnessed across the state. On Tuesday, in protest,  the Pandalam royal family also observed the ‘Ayyappa Dharma Samrakshana’ (save the Lord Ayyappa) day. The protestors said that the court is not bigger than the lord, they say.