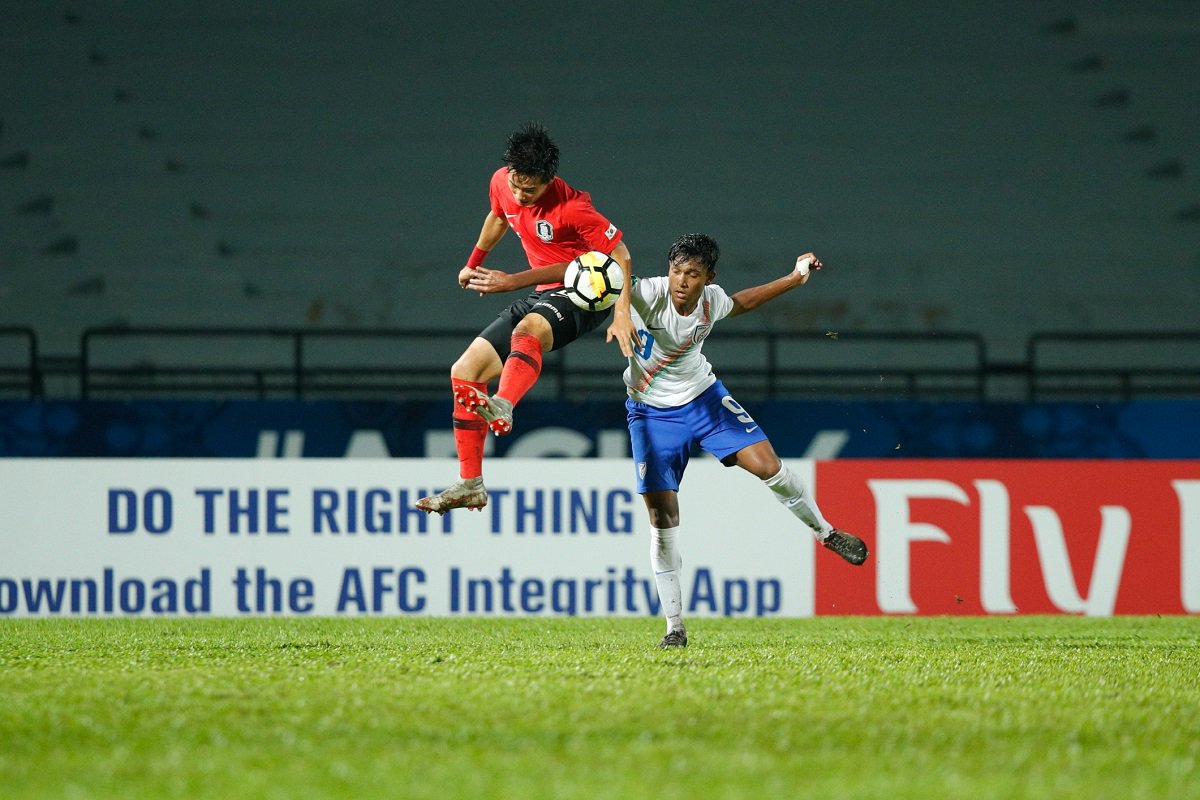 A once in a lifetime opportunity for India’s World Cup qualification dream comes to an end!

Indian U-16 National Team went down fighting 0-1 against the Korea Republic in the quarter-finals of the AFC U-16 Championship at the Petaling Jaya Stadium in Kuala Lumpur, Malaysia on October 1.

Jeong Sangbin’s strike in the 67th minute for Korea ensured that it was a déjà vu for India from their clash in 2002 when the Colts had lost 1-3 to the same opponents at the same stage. However, the Indian colts on this day fought hard and did not surrender until the final whistle, defending with their lives and committing to every tackle – conceding a goal after 337 minutes of play in the tournament.

The Indian side that made it to the quarterfinals for the first time in sixteen years had progressed out of the group stages as runners-up of Group C, with five points in three matches but even after giving Korea Republic a tough challenge and stretching them to the limit, could not emerge victors.

“Success is walking from failure to failure with no loss of enthusiasm.”- Winston Churchill
U-16 @IndianFootball team and coach @23ibiano you are already heroes and the country is proud of you. Take a bow!#StarsOfTomorrow #BackTheBlue #WeAreIndia #IndianFootball pic.twitter.com/R0HxrwamDR

FINAL WHISTLE! India go down to Korea in a thrilling encounter after a commendable effort.

90+1′ Vikram makes a darting run into the box from the right but is ushered out by the defender. (KOR 1-0 IND)

88′ The Koreans are still in the lead in this quarterfinal clash as India hunt the equalizer. (KOR 1-0 IND)

64′ SAVE! Niraj Kumar once mores makes a solid save from close range to deny Korea.

India’s goalie Niraj has proved to be extremely solid between the sticks so far! #KORvIND #AFCU16 #IndianFootball #BackTheBlue #StarsOfTomorrow pic.twitter.com/Ynh7Ehfcjt

After a goalless 45 minutes, the result of the match is still up in the air!

After a goalless 45 minutes, the result of the match is still up in the air! #KORvIND #AFCU16 #IndianFootball #BackTheBlue #StarsOfTomorrow pic.twitter.com/5fxl4gG5Y1

OFF THE BAR! The Korean free-kick touches the crossbar and goes out of play.

54′ Freekick for Korea Republic as Shabas picks up a yellow.

52′ SAVE! A strike from Ridge forces the Korean custodian to an excellent save.

And a header from the freekick for the opponents goes out.

And the second half kicks-off as India get the game underway. A win, will take us to the FIFA U-17 World Cup 2019 Peru.

ONE FOR THE BOOKS! With this half stuck at 0-0, the Indian defence has not conceded a single goal in 315 minutes! ABSOLUTELY STAGGERING.

India does a brilliant job holding favourites Korea to a goalless (0-0) scoreline at the end of the first half.

HT: A goalless stalemate between Korea Republic and India in the quarter finals of the AFC U16 Championship.

43′ Corner for the opponents.

38′ SAVE! Niraj Kumar makes an easy save to deny Korea.

36′ SAVE! Niraj Kumar once more makes a diving save to deny Korea.

34′ SAVE! Niraj Kumar makes an acrobatic save to deny Korea as he pushes the shot for a corner.

30′ The first half an hour has seen solid Indian defending with organization and poise.

28′ Indian defenders are not giving the South Koreans the room to take free shots at goal here. South Koreans finding it hard to play through India’s defensive block.

20′ S. Hong takes a shot from outside the box after cutting inside. His shot, however, is wide.

19′ Strike from distance goes inches away from the Indian goal.

15′ A corner for the opponents is cleared by the Indian defence line.

14′ SAVE! Niraj Kumar makes a strong save to deny Korea Republic from close range.

10′ A shot from Korea from inside the box takes a deflection and goes away for a corner kick.

5′ Vikram Singh tries to find Givson with a through ball, but his pass is hit with a little too much pace and runs out for the goalkeeper to clear.

5′ Bekey Oram commits a foul on the Korean opponents to give the opponents a free-kick.

3′ Ravi Rana tries to tear the Korea defence apart from the flanks by initiating a quick counter attack but is held.

1′ Early attack by Korea from the flanks but a thumping header from Thoiba clears it.

KICK-OFF! And off we go in the quarterfinal clash between India and Korea Republic.

Plenty at stake for India, which can seal its place in next year’s Under-17 World Cup with a victory tonight.

Here are the starting lineups for the evening: