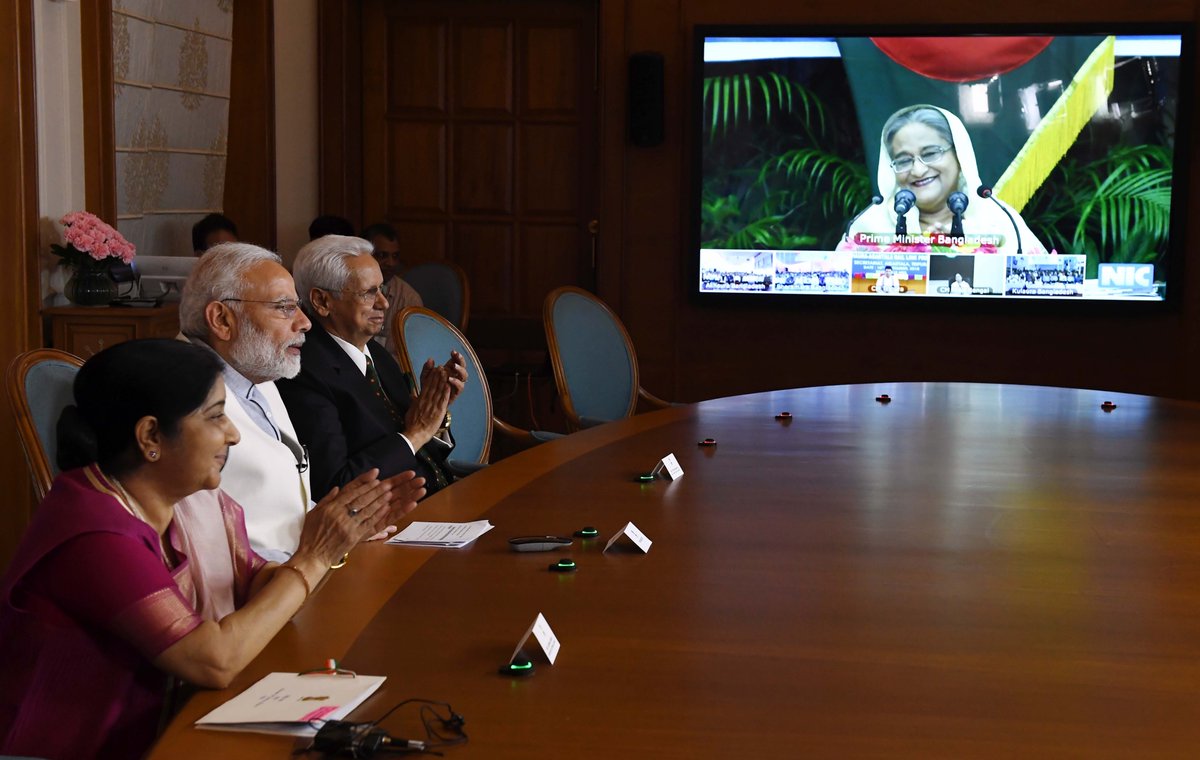 In the third project, rehabilitation of Kulaura-Shahbazpur section of Bangladesh Railways was jointly inaugurated by the Prime Ministers of both the countries.

Prime Minister Narendra Modi said that the projects would give a fresh momentum to the India-Bangladesh relations. Calling it as ‘Shonali Adhyaya’ (golden chapter), the PM hoped that the connectivity projects would further enhance ties between both the countries.

“With the completion of the power project, 1.16 Gigawatts of power is now being supplied from India to Bangladesh. He said this journey from Megawatts to Gigawatts is symbolic of a golden era in the relations between India and Bangladesh.”

PM Modi also underlined that Akhaura-Agartala rail connectivity will provide another link in the cross-border connectivity between the two countries. He expressed satisfaction that there has been a steady progress towards the achievement of the goal.

Reminiscing about his previous meetings with Hasina, PM Modi added, “We have improved and increased power and rail connectivity between India and Bangladesh. The inauguration of such projects will be a golden chapter (Shonali Adhyaya) in our ties. Prime Minister Hasina has done a lot of work for realising a developed Bangladesh. I express the hope that her vision to make Bangladesh a middle-income country by 2021 and developed nation by 2041 would be successful and it would be a proud moment for us. Now, we have come nearer and our ties have become stronger.”

On the other hand, the Bangladeshi Prime Minister also hoped that relations between the two nations would reach new heights. She thanked India for its cooperation and collaboration in various development projects. She also expressed her gratitude to Mamata Banerjee for her decision to give 1,000 MW of additional power to Bangladesh.

External Affairs Minister Sushma Swaraj, who was also present at the event said that the inauguration of the multiple projects is a “visible proof of energy in the strength of the partnership between two countries, which would help to move to a path towards mutual prosperity and highlighted India’s neighbourhood first policy.”

Underscoring that New Delhi would continue to remain a committed development partner of Dhaka, Swaraj added, “We are committed to promoting connectivity and economic development, through cross-border trade, transport, telecommunications, cyber and energy links. These projects will help the two countries inch closer.”

Swaraj’s Bangladeshi counterpart AH Mahmood Ali also hailed the projects and said, “Bangladesh and India have collaborated with each other in all sectors. Among which connectivity and power collectively remain the most reasonable. I am confident that the shared vision of Prime Minister Hasina and Prime Minister Modi would help to elevate our relationship to greater heights in the days to come.”