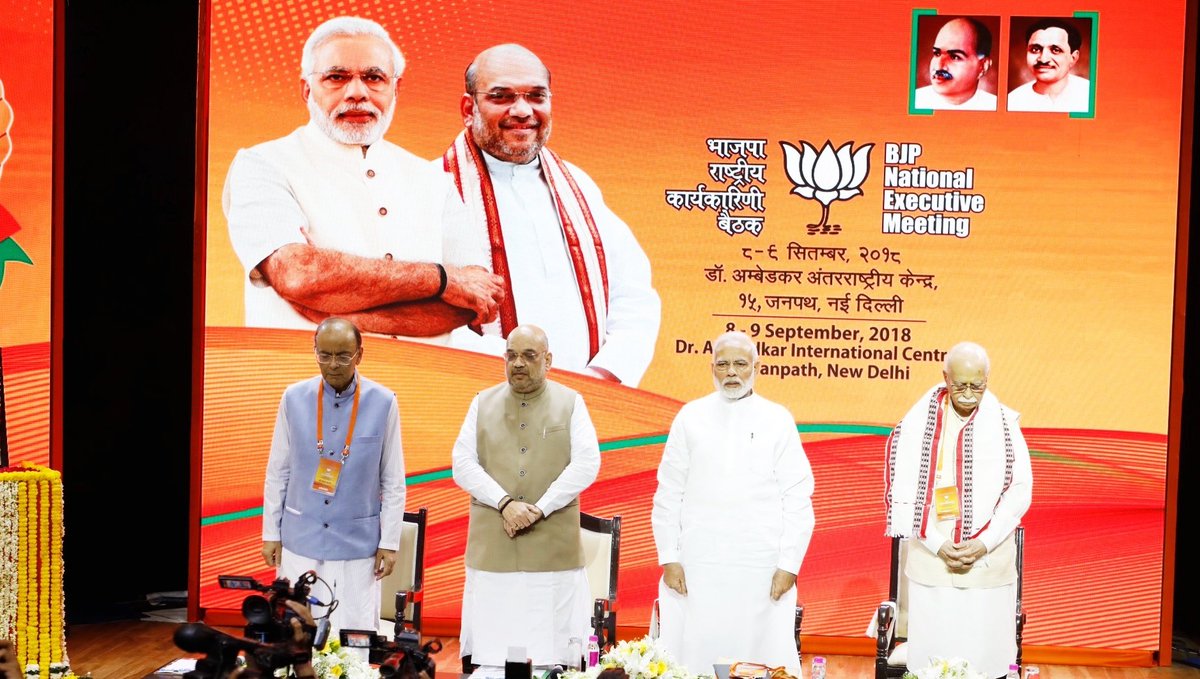 The Bharatiya Janata Party (BJP) on Sunday highlighted the track record of PM Narendra Modi-led government at the party’s national executive meeting in Delhi to kick off its campaign for the 2019 Lok Sabha elections.

The BJP, who is looking to pitch for a second term in office with the development-for-all slogan, coined a new slogan, ‘Ajay Bharat, Atal BJP’, which highlights the party’s commitment to its core values and the country’s progress and forward march under its rule.

BJP National Executive meet saw extensive discussions on many subjects. Party colleagues expressed their insightful views.
Our Party is humbled by the strong support across India. In the spirit of ‘Ajay Bharat, Atal Bhajpa’ we will continue working tirelessly for India’s growth. pic.twitter.com/aWsNxkQwaM

While addressing the party workers on the Day 2 of the two-day national executive meeting, Modi tore into the opposition, particularly the Congress. “The Opposition doesn’t fight over work and issues, they fight on lies. We’ll counter their falsehood, misrepresentation through the great work we have done in 4 years,” Union Minister Ravi Shankar Prasad quoted PM Modi as saying. Prasad added that if the Opposition will ask questions based on the current government’s work, then they will know the difference between the work done by a family which ruled the country for 48 years and a party which has been in power for only 48 months.

Modi also said that though the opposition parties were trying to form an alliance to topple the BJP-led NDA, they lacked leadership and credibility, and had no clear policy to take on the NDA. “People who cannot look at each other and cannot walk together are joining hands to fight the BJP. This is the success of the BJP. It is because of the success of the BJP that these people who have no clear ideology or political thought are coming together to fight against the BJP,” Prasad said, citing Modi.

Speaking about the campaign of the opposition parties, Modi told the party workers to collectively counter falsehoods through facts and by reaching out to the people. “The Congress-led opposition parties fight on the basis of lies. We cannot lie to the people, but we should counter these lies with facts. We have to end the falsehood being spread by the Congress party against the ruling government.”

The PM also elaborated that the policy and programmes of the government did not discriminate people on the basis of caste, religion, social and financial status, and instead, it had worked to transform the lives of people by providing them with access to electricity, subsidised cooking gas, and health-for-all programmes.

“Five crore people have come out of poverty in the last four years of the NDA. Development with a human face and equality with humanity is the message of the union government,” Prasad said quoting Modi.

Speaking on the issue of simultaneous elections, Modi told party workers that nobody should be pressurised to agree to the view of the party, rather there should be a larger debate to discuss the financial burden, security requirements and administrative difficulties of conducting elections every year.

Meanwhile, BJP President Amit Shah informed the members that the PM had already visited 300 of the 543 Lok Sabha constituencies in the four years of the NDA and, by 2019 Lok Sabha elections, he will visit all the constituencies.