Thousands of farmers and workers started their Kisan-Mazdoor Sangharsh rally on Wednesday, the 5th of September 2018, from Ramlila Maidan in New Delhi. Heavy showers, traffic snarls and water clogging, did not deter them from their goal. 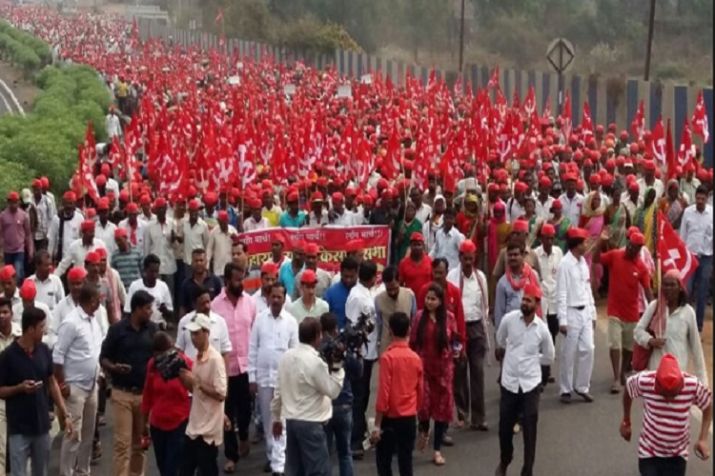 The protesters started arriving in the national capital from various states since Tuesday and were camping at the Ramlila Maidan itself.

Some of the demands of the protesters are – effective implementation of labour laws, minimum wage, more employment and recognition of one crore Anganwadi and ASHA workers as a workforce.

The Kisan-Mazdoor Sangharsh rally has been organised by outfits affiliated to CPI(M) — Centre of Indian Trade Unions (CITU), All India Kisan Sabha (AIKS) and All India Agriculture Workers Union (AIAWU). Those who marched in the Kisan March in Maharashtra in March 2018, are also participating in this. They are demanding a loan waiver and proper minimum support price for farmers.

Facilities and temporary shelters have been erected at the Ramlila Maidan. State-wise camps have been set up, along with a medical camp and a storage area for protest paraphernalia. On Tuesday evening, Left leaders Sitaram Yechury, Brinda Karat and Prakash Karat met the protesters, to set up the obejctives and the process for the final march.

The rally began at 9 am in the morning today, at the national capital from Ramlila Maidan. The protest march is currently on its way to the Parliament.
“We are holding a joint demonstration for the first time to raise voice against the common enemy. This government`s policies are beneficial to corporates and not the people. We want the government to change its policies,” AIKS general secretary Hannan Mollah told reporters.