All you need to know about BIMSTEC | Newsmobile
Saturday, July 2, 2022

Prime Minister Narendra Modi arrived in Kathmandu on Thursday where he is joined by top leaders of countries that form the BIMSTEC, or the Bay of Bengal Initiative for Multi-Sectoral Technical and Economic Cooperation. The fourth BIMSTEC meet will be held over two days starting Thursday. 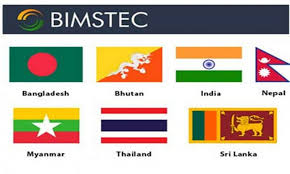 BIMSTEC is a regional grouping of seven nations. Though the name implies that only ‘Bay of Bengal’ nations will be members but two land-locked countries – Nepal and Bhutan – are also a part of the group.

Of the total, five of them are from South Asia – India, Bangladesh, Nepal, Bhutan, Sri Lanka – and two from South East Asia – Myanmar and Thailand.

The sub-regional group of seven countries in South Asia and South East Asia started with four countries in 1997.

What is the strategic importance of this grouping?

The BIMSTEC cohort is houses to around 1.5 billion people, which is approximately 22% of the world’s population. The region has a combined GDP of $2.8 trillion.

What is India’s interest in the grouping?

The BIMSTEC is a bridge between South Asia and Southeast Asia. The two Southeast Asian countries in the grouping, Myanmar and Thailand, have a crucial place for India’s ambitious connectivity plans for northeastern region.

What are the priority sectors of BIMSTEC ?

Seven members of BIMSTEC have so far identified 14 priority sectors. Each country leads one or more areas in a voluntary manner. India leads two — counter-terrorism and transnational crime, telecommunication and transport.

What are expected outcomes from the fourth summit?