Former prime minister Manmohan Singh, in a strongly-worded letter, has urged Prime Minister Narendra Modi to leave the Jawaharlal Nehru memorial complex in Delhi ‘undisturbed’ out of respect for history and heritage.

“Jawaharlal Nehru belongs not just to the Congress but to the entire nation,” Singh said in the letter sent on Friday. He expressed concern over attempts to change the “nature and character” of the Nehru Memorial Museum and Library (NMML), which was established in the memory of India’s first prime minister and the museum at the Teen Murti House has preserved some rooms as they were at the time of Nehru’s death.

The government is reportedly planning a museum for all prime ministers in the Teen Murti complex, which houses the NMML. Singh’s letter is a reaction to this plan.

Singh, the two-time prime minister, wrote that during the Atal Behari Vajpayee’s, who died on August 16, tenure as prime minister, “there was absolutely no attempt made to change the nature and character of NMML and Teen Murti complex in any way. But sadly, that seems to be part of the agenda of the government now.” 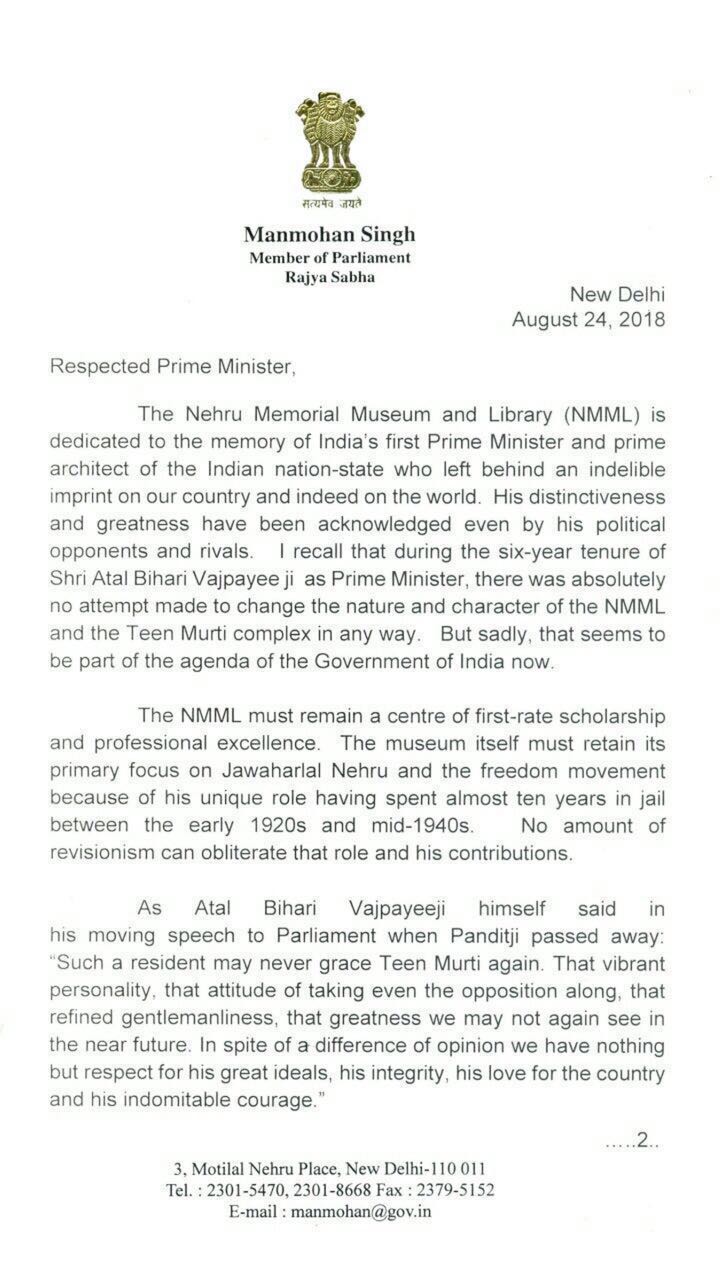 Singh said NMML is “dedicated to the memory of India’s first Prime Minister and the prime architect of the Indian nation-state, who left behind an indelible imprint on our country and indeed on the world.” His distinctiveness and greatness have been acknowledged even by his opponents and rivals, he wrote.

Singh quoted Vajpayee’s speech in Parliament when Nehru died. “As Atal Bihari Vajpayeeji himself said in his moving speech to Parliament when Panditji passed away: ‘Such a resident may never grace Teen Murti again. That vibrant personality, that attitude of taking even the opposition along, that refined gentlemanliness, that greatness we may not again see in the near future. In spite of a difference of opinion we have nothing but respect for his great ideals, his integrity, his love for the country and his indomitable courage’.”