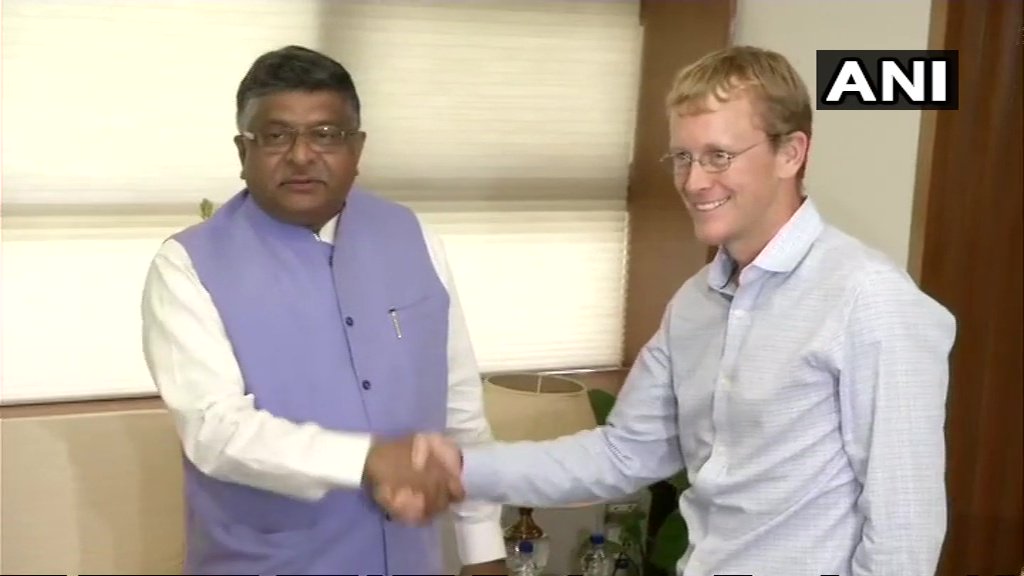 The information technology (IT) ministry on Tuesday asked messaging service WhatsApp to take measures to curtail the spread of fake and provocative messages through its platform and comply with Indian laws.

These include setting up a corporate entity to enable storage of data in India and appointment of a grievance compliance officer in India. “I further asked the CEO of Whatsapp, Chris Daniels, to work closely with law enforcement agencies of India and create a public awareness campaign to prevent misuse of Whatsapp. He assured me that WhatsApp will undertake these initiatives,” tweeted IT Minister Ravi Shankar Prasad after his meeting with WhatsApp CEO Chris Daniels on Tuesday.

WhatsApp CEO Chris Daniels meet IT Minister Ravi Shankar Prasad on Tuesday, to address concerns around the messaging service which has been used as a platform for spreading fake news, which in turn led to horrific crimes like mob-lynching.

Prasad said that WhatsApp must comply properly with Indian laws. “We won’t appreciate a scenario where any problem will have to be answered in America,” he said.

WhatsApp has become an important component of India’s digital storage & must have a proper corporate entity located in India the minister said.

“I had a very productive meeting. I complimented him for extraordinary technological awakening that WhatsApp has led in the country, for education, healthcare, relief in Kerala. These are positive developments,” he said.

The government has also sought a ‘technological solution’ that will be effective in tracing the origin of fake messages which are being circulated across the country.

“I have said in the past that it does not take rocket science to locate a message being circulated in the hundreds and thousands…You must have a mechanism to find a solution,” said Prasad after the meeting. WhatsApp could face abetment charges if no action is taken, he added.

Daniels is in India as the online messaging platform tires to address concerns around fake news on its messaging platform which have led to horrific crimes like mob-lynching. According to sources, Daniels will be in India for 4-5 days and meet business and government officials during his visit.

Last month, senior WhatsApp executives including COO Matthew Idema had met the IT secretary and other Indian government officials to outline various steps being taken by the company to tackle fake news in India.

Over the past few months, fake messages circulating on WhatsApp have incited incidents of mob fury across parts of India. The government has sent out two notices to the Facebook-owned company directing it to take urgent measures to curb false information and rumours being spread on the messaging platform.

The IT ministry has, in the past, said that the platform cannot escape its responsibility for such rampant abuse and needed to find originators of provocative messages. It had also warned that in the absence of adequate checks, it will treat the messaging platform as abettor of rumour propagation and legal consequences will follow.

In its response, WhatsApp has informed the government that it is building a local team, including India head, as part of steps to check fake news circulation even as it did not meet the key demand of identifying message originators.