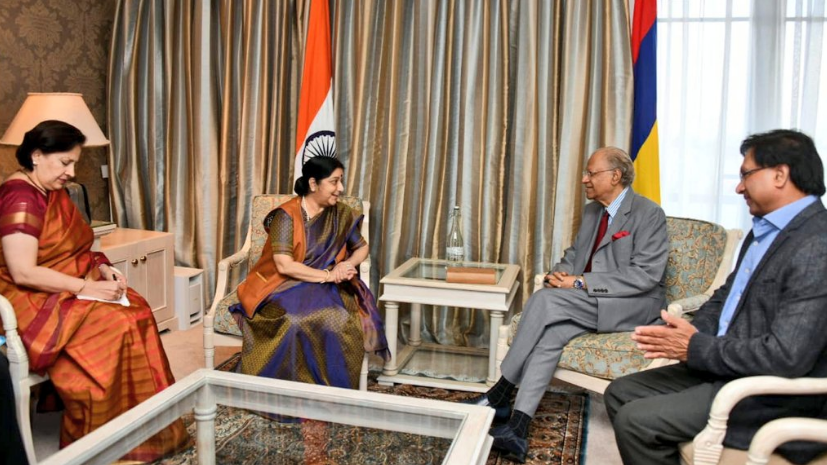 The lab, gifted by the Indian government, will help MGI in teaching Indian languages in Mauritius. While briefing, Swaraj said that similar laboratories equipped with all modern technologies and facilities need to be build up in India as well to promote Hindi and regional languages. Education Minister of Mauritius Leela Devi Dookun and other dignitaries were also present on the occasion.

An auspicious start to the day! EAM @SushmaSwaraj and Minister of State @Gen_VKSingh paid floral tribute to Bapu’s statue at the Mahatma Gandhi Institute in Mauritius. pic.twitter.com/bJMVfSywM6

Connecting with a maritime neighbour! EAM @SushmaSwaraj called on Prime Minister of Mauritius Pravind Kumar Jagnauth. Discussed further deepening our special ties. PM Jugnauth hosted a banquet lunch in honour of EAM which was attended by prominent dignitaries from both sides.

Swaraj called on Prime Minister of Mauritius Pravind Kumar Jagnauth, discussed further deepening of specialties between the two nations. Mr. Jugnauth also hosted a banquet lunch in the honor of EAM, which was attended by the prominent dignitaries from both sides.