Nottingham: The Indian cricket team had the best day so far in the ongoing Test series as captain Virat Kohli and his deputy Ajinkya Rahane shared a brilliant 159-run partnership, before England clawed their way back in a riveting first day of the third Test match at Trent Bridge. 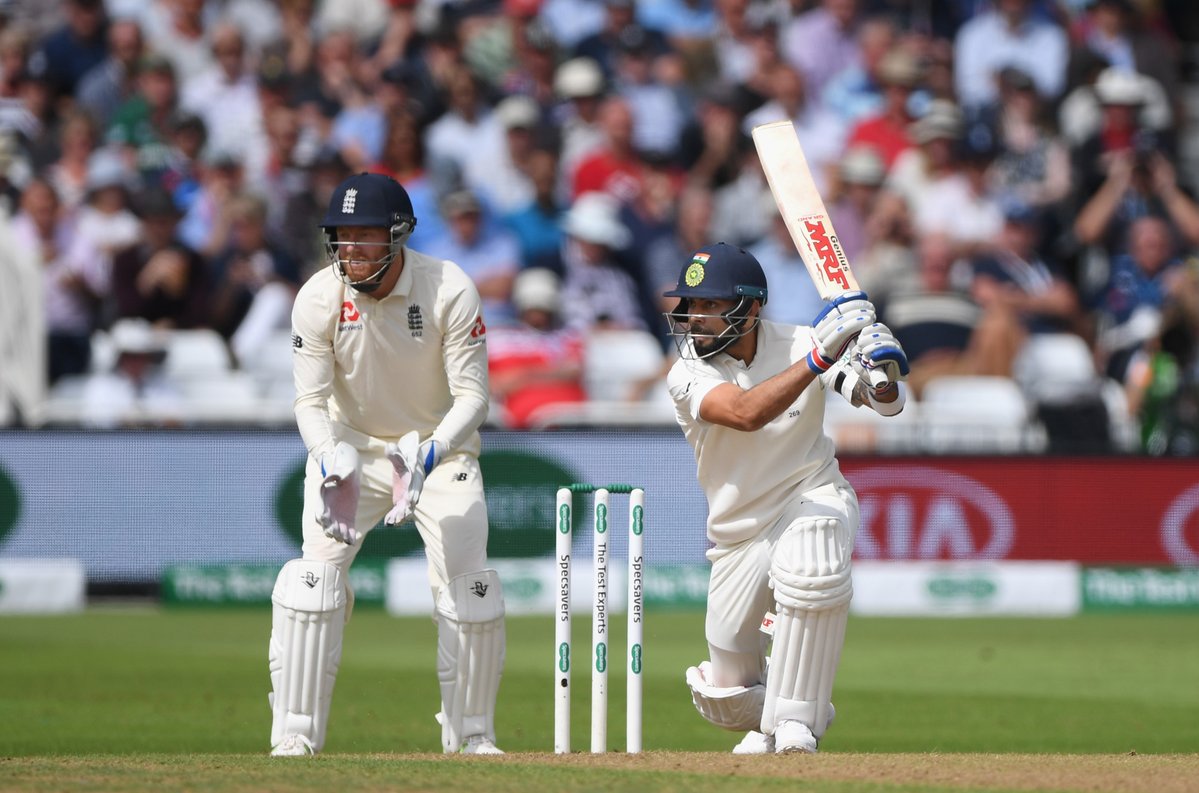 India again lost the toss for the third time and were asked to bat first by England. The Men in Blue made three changes to their team, dropping the out-of-form opener Murali Vijay, wicketkeeper Dinesh Karthik and spinner Kuldeep Yadav.

Left-hander Rishabh Pant was handed his first cap, while Jasprit Bumrah and Shikhar Dhawan returned to the side, following their embarrassing 159-run innings defeat against England at the Lord’s last week.

In overcast conditions and a pitch that offered an even contest between bat and ball, openers KL Rahul (23) and Dhawan (35) made a cautious start as India batted with discipline. The duo shared a 60-run stand before the latter was dismissed by English pacer Chris Woakes.

Woakes then accounted for Rahul and Cheteshwar Pujara (14) and India stumbled to 82 for 3 after 27 overs; and were staring at yet another chance of a batting collapse.

However, Kohli (97) and Rahane (81) were watchful from the beginning, leaving deliveries that were swaying away from them. The duo displayed a picture of calmness and were excellent in running between the wickets, as India steadied the ship and put England in a spot of bother.

Both Kohli and Rahane looked at ease against spin and pace and played glorious shots to put India in a commanding stage. The two players scored 23 boundaries between them and registered their fifties respectively.

England tried all their tricks and plans to separate Kohli and Rahane, but were always thwarted by the duo. India were in a comfortable position at tea.

Meanwhile, Rahane, who scored 3,000 Test runs in the process, got a life on 57, when James Anderson failed to take a blinder at point off Woakes. However, the relief was short lived as the 30-year-old Mumbai batsman played a similar shot, wherein Alastair Cook pulled off a one-handed catch, eventually being dismissed for a well-made 81.

Kohli (97) looked in sublime touch and was on course to reach his 23rd Test century, when he decided to go downtown and played a rash shot, resulting in a thick edge towards Ben Stokes at slip. The skipper missed his ton by just three runs.

Thereafter, Pant (22 not out) and Pandya (18) joined forces and steadied the Men in Blue’s innings after England’s comeback. Pant clobbered a massive six off spinner Adil Rashid to get off the mark in style and played the role of an aggressor, while Pandya maintained composure and played with watchful eyes.

Just before the end of the first’s day play, Anderson’s brilliant outswinger was too good for Pandya, as he managed to kiss the edge of the bat and offered a simple catch to wicketkeeper Jos Buttler. With this, Anderson became the second bowler to take 100 wickets against India and is just behind Sri Lanka’s legendary spinner Muttiah Muralitharan, who leads the charts with 105 wickets.

India would be aiming for a score of over 400 and put pressure on England, if they are to win this Test match and stay alive in the series. Currently, England is leading 2-0.