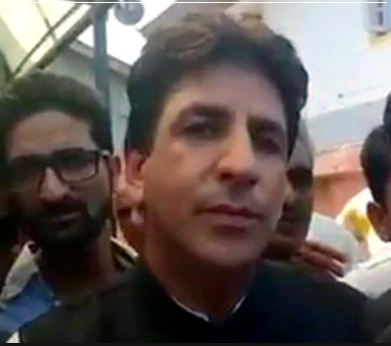 National Conference (NC) leader Bashir Ahmed recently said that all those people who have come here (Kashmir) to fight issues that are related to Kashmir are ‘Shaheed’, whoever dies in an accident or whatever ways should be called martyr.

“Whosoever dies in an accident or whatever way, we call him a martyr. People in J&K are dying unnecessarily, in cross-firing. GoI is not taking the J&K issue seriously: Bashir A Veeri (NC) on his statement, “Sab shaheed hain jo yahan (J&K) par Kashmir ke masle ke liye ladne aaye hain.”

“We have been saying this since 1953 when the democratically elected Prime Minister (Sheikh Abdullah) was arrested. Shouldn’t we call the people who died in Kashmir since 1953 as ‘Shaheed’? Who will you call ‘Shaheed’ then? Are they fighting for their personal interests? There is some reason because of which people are shedding hot blood here.

All are ‘shaheed’ who have been fighting here over Kashmir issue. Nobody is committing any crime,” Veeri told media here.

His statement comes after the National Conference leaders staged a protest against interference with Article 35A of the Constitution over the weekend that provides special status to permanent residents of Jammu and Kashmir.

ALSO READ: This is what Asaduddin Owaisi feels about RaGa hugging NaMo

The Supreme Court is all set to hear a batch of petitions on Monday, which challenge the validity of Article 35-A of the Constitution.