A technology that has made several breakthroughs since it was first invented in the 1980’s. thanks to the contributions made by NASA employees Samantha Snabes and Matthew Fiedler, 3D printers are affordable, and are readily available to the general public. People have made use of them to print everything from cup holders to cars.

But of course, as with everything, there are those who have misused the technology to create more sinister, deadly items. In 2013, Cody Wilson, an American crypto-anarchist, and founder of Defense Distributed, a non-profit organization that specialises in digital weaponry, successfully created blueprints for a 3D printed pistol, made entirely of plastic. Subsequently, the US State Department threatened to prosecute him for violating firearm regulations, forcing Wilson to take down the blueprints for his invention from the internet.

So should 3D printed guns worry us more than ordinary firearms? Gun experts say yes. These guns allow people to bypass any form of background checks, and documentation. Since they do not have a serial number, it becomes impossible to trace the gun back to its owner in the event of a crime. Last, but not the least, these guns are made of plastic, which makes them impossible to be detected by x-ray machines and metal detectors.

This makes it an extremely attractive weapon for criminals. 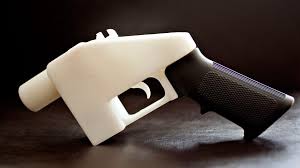 Despite the judicial ruling and efforts by the governments to prevent 3D guns from becoming widely available online, there is a growing fear amongst tech experts that it is already too late to do anything.

Anything can be downloaded from the dark web and illegal websites – from free music to pornography. The likelihood of gun blueprints being widely available on this part of the internet is extremely high. Such an invention only increases the likelihood of gun violence not just in the United States, but everywhere in the world.

In the US the issue is back in the limelight after Wilson, who invented the deadly weapon back in 2013, recently settled the lawsuit with the United States State Department, allowing him to make his designs available to the public starting August 1, 2018. The Trump Administration’s lax attitude towards gun safety was the perfect opportunity for the guns-right activist to once again put his plans into action.

Lawmakers in the USA are now engaged in a heated debate over the legality of 3D printable firearms. Several state legislators have moved to file a lawsuit against the Trump Administration for its decision to allow the designs for printable guns to be accessible to the public. Although a federal judge has temporarily blocked the release of the software, this clearly sets a dangerous precedent for gun use, which is already such a burning issue in the US.