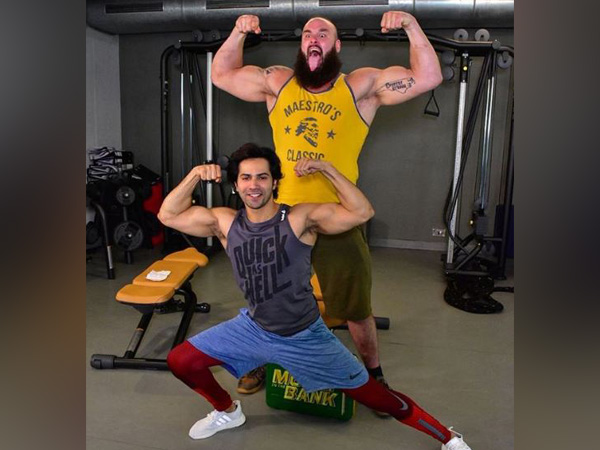 The body-building fanatic made the most of the moment by posing with his ‘hero’ in sports fashion. The actor wore a grey T-Shirt and blue shorts with a grey zipper jacket and a pair of red tights. He completed his look by pairing up with white sneakers. While Braun can be seen in a yellow printed vest and green shorts.

The 31-year-old actor took to his Instagram and treated his followers with a photo of himself and Braun flexing together. He wrote, “@braunstrowman the monster and me get into a flexing contest. Great guy had a lot of fun meeting him thank u @wwe for setting it up.”

@braunstrowman the monster and me get into a flexing contest. Great guy had a lot of fun meeting him thank u @wwe for setting it up

Prior to this, the ‘Main Tera Hero’ star had also met WWE stars like, Jinder Mahal, Triple H, and Sasha Banks.

On the professional front, Varun is all set to share the screen space with actress Anushka Sharma in the upcoming film ‘Sui Dhaaga’.

Helmed by Sharat Katariya, the film has been produced by Maneesh Sharma under the banner of Yash Raj Films. The flick is based on the Prime Minister, Narendra Modi’s Swachh Bharat Mission. ‘Sui Dhaaga’ will hit the theatres on September 28.