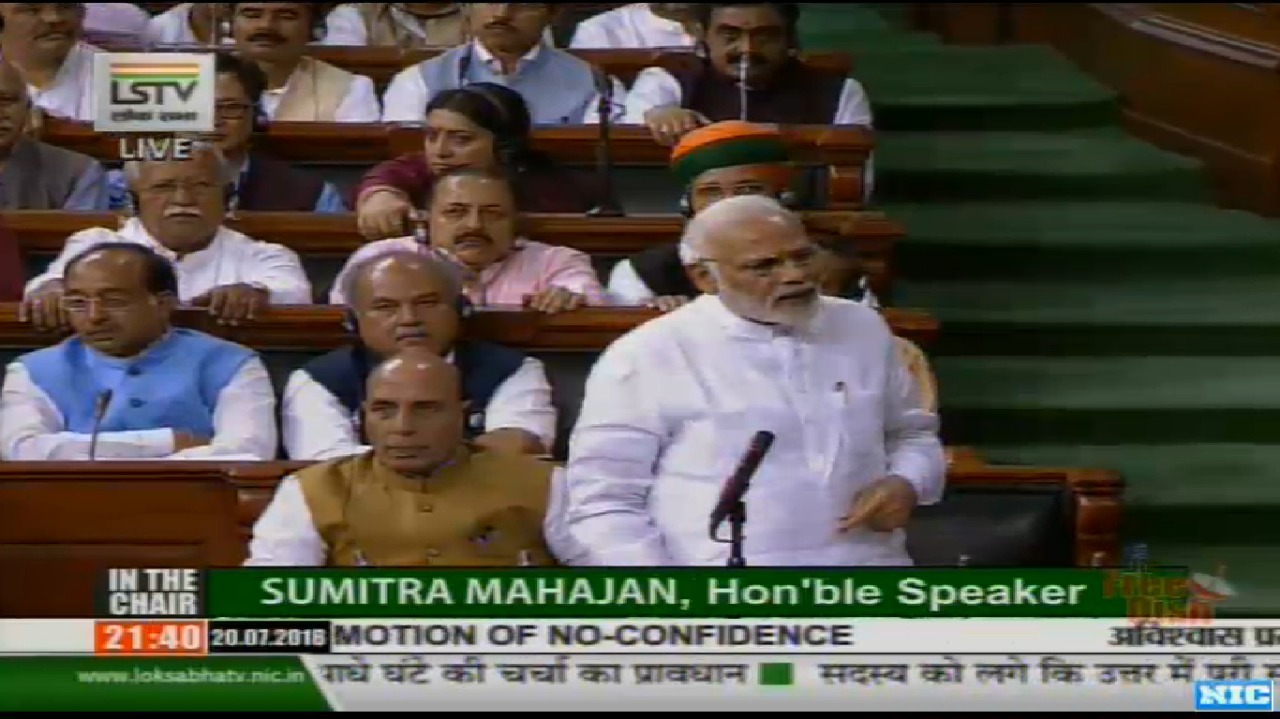 As expected Prime Minister Narendra Modi won the trust vote in Lok Sabha late Friday night, as no-confidence motion was rejected. The NDA got 325 votes while the opposition could muster only 126 votes. The total votes caste were 451, the speaker Sumitra Mahajan announced after a 12 hour-long raucous debate and voting in the house.

The debate was dominated by theatrics and jibes, accusations and emotions. The finale to the day-long debate was PM Modi’s speech in which he rebutted every claim and accusation. He said the motion was moved to destabilise the country. “To create uncertainty in the country, Congress has brought this no-confidence motion by misusing constitutional provisions,” Modi said.

In his characteristic style Modi remarked on Rahul Gandhi’s short journey to the treasury benches to hug him and indicated with hand gestures that Gandhi was in a hurry to be in the PM’s chair.

“What is the hurry to come to power,” he asked. “In the morning, the voting was not over, the debate was also not over. One member comes running to me saying- Utho Utho Utho..What is his hurry to come to power? Let me tell this member it is the people who elected us. That is how we have come here,” said Modi.

Congress President Rahul Gandhi had hugged the PM at the end of his speech, clearly inspired by PM’s hug diplomacy. Modi in turn mocked Rahul Gandhi’s wink (to Jyotiraditya Scindia after hugging the PM) and said that the whole country watched “what the eyes did.” He also rebutted the Bhagidaar accusation saying that “We are chowkidar as well as bhaagidar but we are not Saudagar, not Thekedar. We are Bhaagidaar of the poor and the dreams of the people and are proud of it.”

While Rahul Gandhi’s speech trended on social media, his claims that French President Macron told him that there was no secrecy clause between New Delhi and Paris was refuted by the French government creating a huge controversy.

Rahul Gandhi started his speech in favour of the motion with Jumlas, ended with Jhappi and stirred the hornet’s nest on the way, inviting a privilege motion against himself. The issue was Rafale deal on which he claimed that Defence Minister Nirmala Sitharaman had lied to the nation. Anurag Thakur of the BJP demanded an apology from the government.

The Congress president also alleged that the government was close to India’s business tycoons and had failed to create enough jobs.

The BJP government defeated the no-confidence motion, moved in the parliament after 15 years, both through the voice vote and a  division of votes. The no-confidence vote was moved in the house by the Telegu Desam Party (TDP) and supported by other opposition parties including the Congress.

The BJP-led government was confident of getting a majority. However, more than proving numbers, this motion was a battle for perceptions ahead of key elections – assembly polls in Madhya Pradesh, Rajasthan and Chhattisgarh and the 2019 Lok Sabha polls.

Some highlights of the debate which preceded the voting are below: