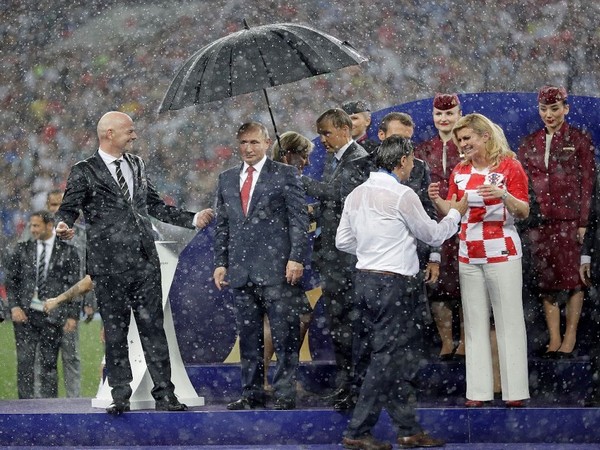 On Sunday France won its second FIFA World Cup title after defeating Croatia in a high-octane final at the Luzhniki Stadium in Russia. In a tournament filled with dramatic ups and downs, France stood tall in the end, keeping cool at all times despite not being in its sublime form in the group stage.

However, as the ceremony commenced and it started raining Putin was the only one to be offered an umbrella, while other world leaders like French President Emmanuel Macron and Croatian leader Kolinda Grabar-Kitarovic along with Fifa boss Gianni Infantino got drenched.

Apparently, all of them were unfazed by the lack of any specific effort to shield them from the rain. However, later someone managed to rustle up a few umbrellas (smaller ones) for the visiting guests, as per several media reports.

Soon after the picture of Putin surfaced on social media, Tweeple could not maintain their calm, and have responded to it.

“Putin to @EmmanuelMacron : “my umbrella is my umbrella, its not your umbrella, you French fry get yourself soaked in rain first,” a Twitter user wrote.

Another hilarious tweet read, “Sir how many umbrellas should we bring?
Putin: Just one. They didn’t let us win. Let them soak!”
“Bucketing down now. They’ve only brought one umbrella, and it’s for Putin. He is NOT sharing it,” NYT journalist tweeted.

A female Twitter user wrote, “Fun fact: while Putin is being shielded by an umbrella, Croatia’s President is a 46-year-old conservative woman who is getting soaked and doesn’t seem to care.”