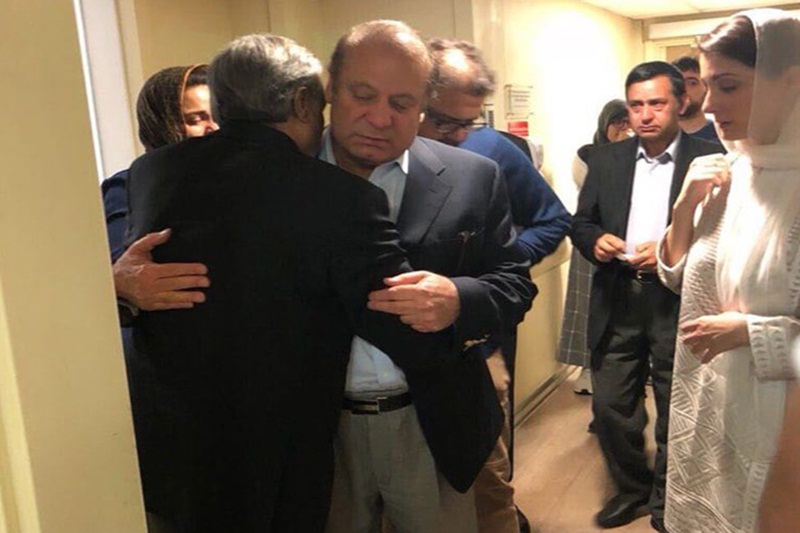 Lahore: Convicted in an Avenfield reference case, former Pakistan Prime Minister Nawaz Sharif made his entry to the country amidst high drama.

Sharif and his daughter Maryam were surrounded by the National Accountability Bureau (NAB) team on Friday, the moment Etihad Airlines flight EY 243 landed at the Allama Iqbal International Airport of Lahore at 8:48 p.m. (local time).

Even though the NAB team, which accompanied the two in the flight, surrounded them the moment the plane landed, Sharif and Maryam were formally arrested after the immigration.

They were surrounded by Airport Security Force commandos at the airport as they got down from the aircraft. Fellow passengers were asked to wait as the duo was first taken to the cars waiting at runway. However, after some discussions with the Rangers they walked down to the terminal with Sharif holding a bag in his hand.

According to media reports and visuals from the aircraft, which were shot by co-passengers, Sharif and Maryam did not resist and got up to leave as soon as the flight touched the ground.

Nawaz Sharif’s mother Shamim Akhtar and Shehbaz Sharif son Salman were present also at the airport and allowed to meet him.

Media reports from Pakistan claim that the two-hour-20-minute flight delay helped in mobilizing the PML-N cadre waiting at the airport, as visuals of hundreds of them on the road appeared on Pak TV channels.

The father-daughter duo, who left for Pakistan from London on Thursday, earlier arrived at Abu Dhabi on Friday, where they had a six-hour lay-off. Sharif spoke to media over a telephonic conference, in which he urged people of Pakistan to stand up and fight for democracy.

Sharif and his daughter Maryam are convicted in an Avenfield reference case on July 6.
From that day, they have 10 days to appeal before the court against the order, which is till July 16.

While Sharif has been given 10 years of imprisonment, Maryam has been awarded eight years in jail. Sharif also has a fine of eight million pounds slapped on him in the Avenfield Reference case.

The case pertains to the purchase of Avenfield apartments through offshore companies, the beneficial owner of which was Maryam. Earlier, NAB sources in Islamabad said that both the convicted would be kept at Adiala jail for a day before being transferred to Attock Fort prison in Khyber Pakhtunkhwa.

According to media reports from Pakistan, a 16-member team of NAB, that included two women officers, was formed under the headship of Director Amjad Ali Aulakh, to arrest Sharif and Maryam.

The father-daughter duo was in London to meet Sharif’s ailing wife Begum Kulsoom.
Maryam was sentenced to eight years of jail and fined two million pounds by the Accountability Court.

Earlier in April, Pakistan’s Supreme Court disqualified Nawaz from contesting elections for the rest of his life because of his corruption cases as revealed in the Panama Papers. Sharif had stepped down as prime minister in July after the apex court’s ruling.