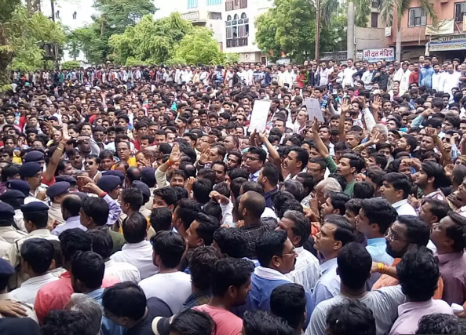 After the news of a seven-year-old who was allegedly kidnapped and raped in Madhya Pradesh’s Mandsaur broke out, a massive protest was hurdled across the city and Madhya Pradesh Chief Minister Shivraj Singh Chouhan has said that he will try to ensure death penalty for the accused.

The girl was allegedly abducted from outside her school in Madhya Pradesh’s Mandsaur district by a man and later raped and tried to kill her, resulting in massive protests by the locals who kept the market area of the city closed on Thursday. The incident took place on Tuesday evening and the accused, identified as Irfan alias Bhaiyu (20), was arrested late on Wednesday.

“The girl was found near Lakshman Darwaza on Wednesday morning around 10:00 am. The girl was found with injuries all over her body. She was raped. We rushed her to a nearby hospital, but she was later referred to Indore for further treatment,” said Manoj Singh, Superintendent of Police, Mandsaur.

In a statement released by the Chief Minister, he stated,”The trial of the case will be conducted in a fast-track court. We will try our best to ensure that the accused is awarded death penalty. Demons like these who conduct such acts of atrocities have no right to live in the society.”

During the outcry at the time of the horrific Kathua rape and murder, Shivraj Singh Chouhan had been one of the most vocal leaders to back capital punishment for the perpetrators, highlighting how he was the first state government to make capital punishment mandatory for rapists of minors.

The Madhya Pradesh Assembly unanimously passed a Bill awarding death to those found guilty of raping girls aged 12 and below. With this, Madhya Pradesh becomes the first State to make rape accuse face the gallows.