Home Home Slider ‘We will never ever attack yatris as they are our guests’, says... 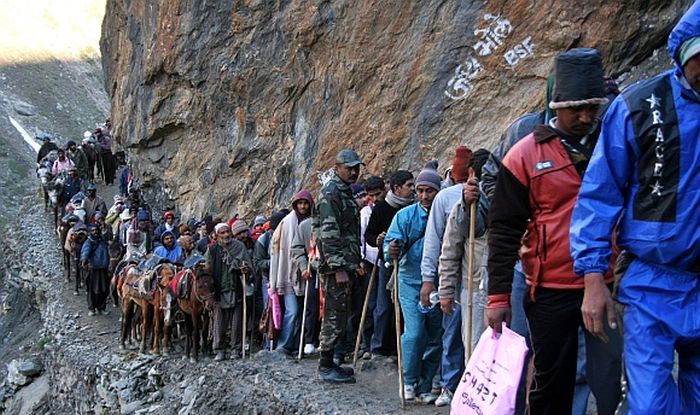 In an audio clip released by Hizbul Mujahideen, the terrorist group assured Amarnath pilgrims of safety while doing the pilgrimage in Jammu and Kashmir this year. The clip which is circulating on Whatsapp carries a picture of Riyaz Naikoo who is the commander of the militant group.

In an audio message, Naikoo said the Hizbul have no plan to attack the pilgrims. “We will never ever attack yatris as they are our guests and come here to perform their religious rituals.”

“Our fight is only against India’s occupation of Jammu and Kashmir,” Naikoo purportedly said in the clip. “We have nothing against the people of India or Amarnath pilgrims who come here for religious reasons. However, they should not connect the pilgrimage to the political issue of Kashmir.”, news reported via PTI.

ALSO READ: This new scheme makes getting a passport easier

Naikoo then purportedly added that the Amarnath Yatra pilgrims need not fear coming to the state. “We have hundreds of thousands of Biharis who come to Kashmir as labourers or beggars and are found in every nook and corner of the Valley. Has there been any instance of them being harassed in so many years?,” he asked.

The previous year, during the Amarnath Yatra eight people were killed and 17 were injured in an attack on the bus carrying Amarnath pilgrims. This year Amarnath pilgrimage has started and will end on August 26.

ALSO READ: PM Modi at an ‘all time high’ threat; even ministers need…

“With the cooperation of public, all security agencies and development agencies, we have put a scheme in place and are trying our best to address concerns of the Yatris,” said advisor to the Jammu and Kashmir Governor Vijay Kumar.