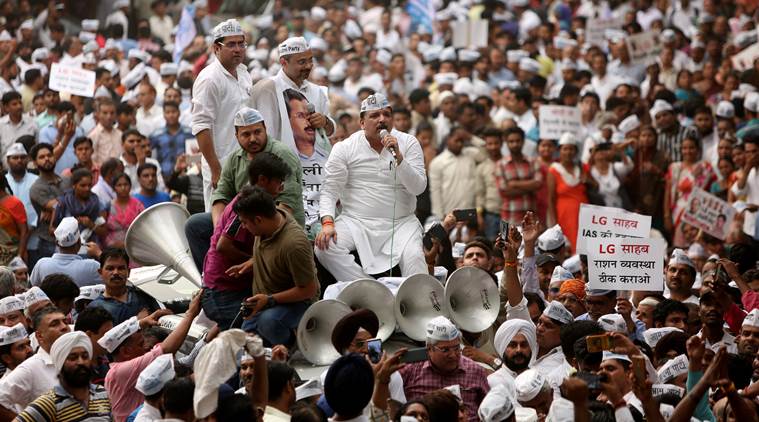 New Delhi : The Aam Aadmi Party (AAP) does not have permission to hold a protest march in the national capital, the Delhi Police claimed on Sunday.
Deputy Commissioner of Police (DCP) Madhur Verma told ANI that specially-trained personnel have been deployed to stop or control the protestors.

“They don’t have permission (for protest march). They have been contained at Parliament Street. They are being told that they can’t go any further. Specially-trained personnel are deployed here. We are sure they will (AAP members and protesters) listen to us,” he said.

Scores of people, including members and supporters of the AAP are carrying out a protest march to the Prime Minister’s residence in support of Delhi Chief Minister Arvind Kejriwal.
Kejriwal, along with some of his cabinet ministers like Manish Sisodia, Satyendra Jain, and Gopal Rai, are on a sit-in strike at Raj Niwas, the official residence of Lieutenant Governor Anil Baijal, since June 11.

The strike is being staged demanding a direction to the Indian Administrative Service (IAS) officers working under the Delhi administration to end their ‘undeclared strike’, among other demands.

However, the IAS association, earlier in the day, refuted claims of Delhi’s bureaucrats participating in any strike.

Addressing a press conference here, IAS Association member Manisha Saxena said, “I would like to inform that we are not on strike. The information that IAS officers in Delhi are on strike is completely false and baseless. We are attending meetings and all departments are doing their work. We are sometimes also working on holidays.”

Meanwhile, the DCP said that at the time of protest, the exit gates of four metro stations, namely Udyog Bhawan, Lok Kalyan Marg, Patel Chowk and Central Secretariat would be closed.

He also warned that if anyone marches towards the Prime Minister’s residence, he/she will be detained immediately by the Delhi Police.

Kejriwal claimed that the IAS officers working for the Government of National Capital Territory of Delhi (GNCTD) were “only working on important files” and “not responding to Ministers’ calls and messages, and not attending meetings”.