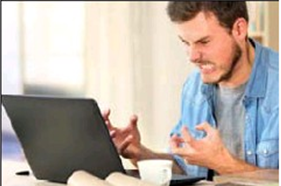 Hackers have found a novel way of infiltrating computers – through sonic attacks. It can crash a laptop by simply playing a sound through the speakers of the device and corrupt all the data.

Hackers can use this technique to disrupt surveillance systems, sabotage medical devices and crash devices remotely, which include symbols and text messages or other messaging apps. This is because all these devices rely on magnetic disk drives.

It has been proven that playing sonic and ultrasonic sound via built-in speakers, for as little as 12 seconds, does interfere with the hard drive through high-frequency vibrations, which are very difficult to detect or stop.

Therefore, it is inadvisable to open an unknown mail from a stranger, which has a video or an audio file. The reason is that intentional acoustic interference causes unusual errors in the mechanics of magnetic hard disk drives in desktop and laptop computers. This damages the integrity and availability of both hardware and software after which they are unable to write data.

Researchers have proposed ways to protect laptops from such potential attacks, which include noise dampening materials in the computer and updating the software which recognizes and prevents the sound from being played.

Good news for consumers using newer PC’s and modern laptop’s as they are solely dependent on solid state drives. To mitigate attacks, researchers have created a new sensor fusion model that could be delivered through a firmware update. Once malicious ultrasonic waves are detected, the firmware would help prevent the sonic attacks happening on PC’s and laptops.